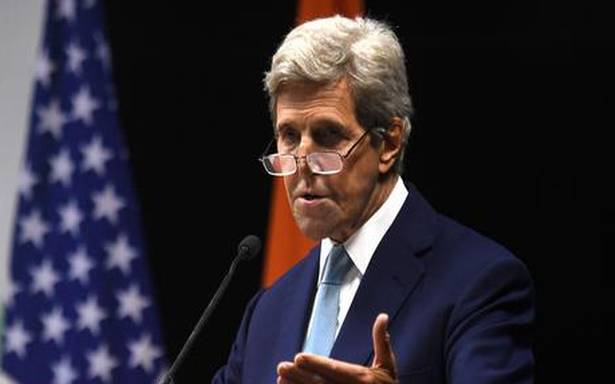 The world is watching commitments on climate change made by all “big emitters” said U.S. Special envoy John Kerry on Tuesday. He was making a pitch for India to announce a pledge to reduce emissions to “net zero” (carbon-neutral) by 2050 — to ensure global warming is held at 1.5 degrees Celsius — at the upcoming COP26 summit in the UK in November.

However, the government said it does not consider the “net zero” goal its only priority at present, and Mr. Kerry admitted that he had not received a firm pledge from New Delhi on the issue yet.

Speaking at the end of his visit to Delhi, where he launched the U.S.-India Climate Action and Finance Mobilization Dialogue with Minister of Environment and Climate Change Bhupender Yadav, Mr. Kerry said he had “personally urged the government” to increase India’s commitments to ensure global warming levels are held at 1.5 degrees, instead of the 2 degrees announced at the Paris summit in 2015. Mr. Kerry said it is important to announce this as a part of India’s “Nationally Determined Contributions” (NDCs) now, as the next decade is critical for the battle against climate change.

“The next 10 years will decide whether 1.5 degrees is achievable. And they will also decide whether net zero [emissions] is feasible by 2050. Because if you don’t do enough in the first decade, you can’t get a steep enough production curve to do it afterwards, barring some miracle discovery that we don’t have as yet today,” Mr. Kerry told a group of journalists.

When asked if he had any firm commitments from India on raising climate ambitions, Mr. Kerry said “no one said no, but no one said yes”, adding that the final decision was Prime Minister Narendra Modi’s prerogative, and “internal deliberations” need to take place to make that decision.

At a separate function during the day, a day after he met Mr. Kerry, Minister for Environment, Forest and Climate Change Bhupender Yadav said India is focused on the “key issues” of climate justice and sustainable lifestyles, stressing on the inequality between the demands of developed societies from developing countries on emissions cuts.

“[I] Underlined that ‘net zero’ alone is not enough. We need deeds, not just plain words,” Mr. Yadav said, speaking at an event organised by business chamber FICCI. He also referred to a recent report of the UN’s Intergovernmental Panel on Climate Change (IPCC), that said that even if the world achieves a global warming level held at 1.5 degrees by 2050, it would still be “too little too late” to clean up the greenhouse gases already in the atmosphere, as a “clarion call” for developed countries, a Ministry press release said.

India has not yet given a commitment date for achieving carbon neutrality or net zero, while about 130 countries have set or are considering a target of reducing emissions to net zero by 2050, including the United States. Another five have set later dates, while China, the world’s largest emitter of 25% of global greenhouse gases, has set 2060 as its date for carbon neutrality.

Mr. Kerry said his discussions in Delhi and the agreements signed had been “terrific”, adding that the U.S. was keen to help India finance its latest target of building 450 gigawatts of renewable energy capacity by 2030.

To a specific question on the latest set of funding restrictions on a group of 10 American, European and Australian NGOs including those working on climate change, that The Hindu had reported on Tuesday, Mr. Kerry said he had not had “the chance to have a conversation” with Indian officials on the issue, as he wasn’t fully aware of the details.

“Exchange within civil society is critical and very important, and contributes to the process. I don’t want to express criticism on something I’m not aware of, [but] as a matter of principle, we certainly would want to try to see as broad an embrace of civil society as possible in the [climate change] discussions and we think that that contributes to addressing the crisis,” he said.

(With inputs from Jacob Koshy)

09/14/2021 India Comments Off on No firm commitment from India on net zero, says John Kerry
India