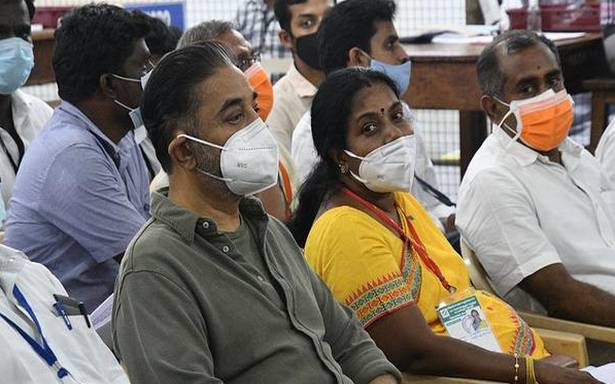 Kamal Haasan loses in Coimbatore South and Seeman in Tiruvottriyur

The space for the ‘third political alternative’ in Tamil politics has shrunk once again as two popular faces — Kamal Haasan, founder of Makkal Needhi Maiam, and Seeman, chief co-ordinator, Naam Tamilar Katchi, who challenged the duopoly of the Dravidian parties — lost in Coimbatore South and Tiruvottriyur.

After running a strong campaign, Mr. Seeman trailed the second-placed AIADMK candidate, K. Kuppan, by 1,774 votes in Thiruvottriyur after round 18. Mr. Haasan, who campaigned in every ward, put up a tough fight until the end before being defeated by Vanathi Srinivasan of the BJP in a three-way contest. Congress candidate Mayura Jayakumar was placed third. T.T.V. Dhinakaran of the AMMK lost in Kovilpatti to Minister Kadambur Raju. Naam Tamilar Katchi spokesperson Packiarajan said the party’s performance showed that there was more work left to be done.

“It would have been great had Mr. Seeman gone to the Assembly. We also expected to become a recognised party by polling over 8% of the votes. It didn’t happen…,” he said.

Having positioned himself as the alternative, Mr. Haasan is staring at a difficult path ahead.

MNM general secretary C.K. Kumaravel was confident that Mr. Haasan would put this loss behind him and emerge stronger.

“Our leader put his heart and soul into the campaign and reached out to people despite a leg injury. We have to respect the people’s mandate. The party will overcome this loss and emerge stronger,” he said.

05/02/2021 India Comments Off on No alternatives emerge as Dravidian parties retain their ground in T.N.
India