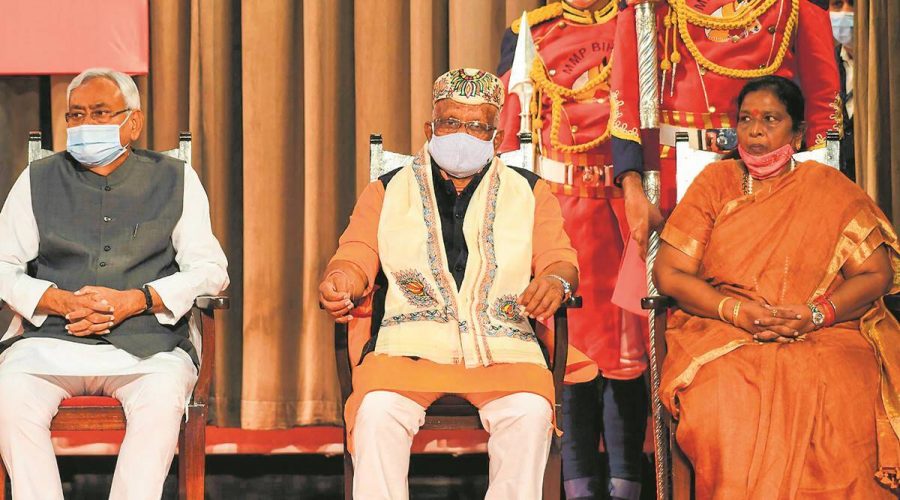 A total of 15 ministers were administered the oath of office by Bihar Governor Phagu Chauhan — seven from the BJP, including Tarkishore Prasad and Renu Devi; six from the JD(U), including Nitish; and one each from the Vikassheel Insaan Party (VIP) and Hindustani Awam Morcha (Secular). 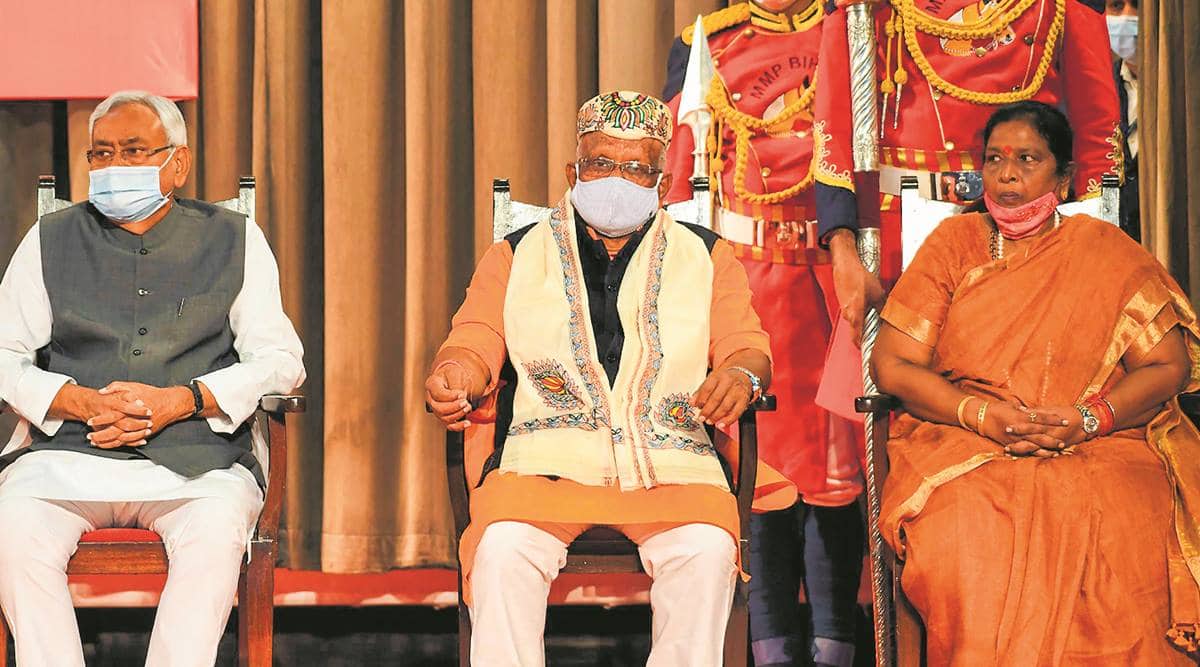 A total of 15 ministers were administered the oath of office by Bihar Governor Phagu Chauhan — seven from the BJP, including Tarkishore Prasad and Renu Devi; six from the JD(U), including Nitish; and one each from the Vikassheel Insaan Party (VIP) and Hindustani Awam Morcha (Secular).

Union Home Minister Amit Shah and BJP national president J P Nadda were among those who attended the ceremony.

Congratulating Nitish, Prime Minister Narendra Modi tweeted: “The NDA family will work together for the progress of Bihar. I assure all possible support from the Centre for the welfare of Bihar.”

The BJP’s former deputy chief minister, Sushil Kumar Modi, who has been dropped this time, may be accommodated at the Centrce, but there is no official word yet. Sushil Modi first became Deputy Chief Minister in 2005, when Nitish came to power, and retained the post since then — except when Jitan Ram Manjhi was Chief Minister between 2014 and 2015, and when the JD(U) was with the RJD in 2015-2017.

The BJP, which increased its tally from 53 seats to 74 in the 243-member Assembly, has followed the Uttar Pradesh formula with two Deputy Chief Ministers.

While former minister and seven-time Patna Saheb MLA Nand Kishore Yadav did not take oath on Monday, he is tipped to be the Assembly Speaker – a post held by the JD(U) so far.

Prem Kumar, another senior party leader who was not included in today’s list of ministers, may be accommodated later.

VIP chief Mukesh Sahani, who lost by a narrow margin from Simri Bakhtiyarpur, also took oath on Monday. As promised by the BJP earlier, he will be sent to the Upper House in the state. From the HAM, former Chief Minister Jitan Ram Manjhi’s son and MLC Santosh Kumar Suman took oath. Both the VIP and HAM won four seats each.

Meanwhile, the Opposition Mahagatbandhan alliance boycotted the oath-taking ceremony, with state RJD president Jagdanand Singh calling it “loot of the mandate”. The RJD emerged as the single largest party with 75 seats.

In a tweet, RJD leader Tejashwi Yadav congratulated Nitish for being “nominated” as the Chief Minister. “I hope he makes his priority positive issues such as aspirations of the people of Bihar, the NDA’s promise of 19 lakh jobs — employment, education, health, livelihood, irrigation and justice — rather than his ambition for the chair,” he tweeted.

In an apparent swipe at Nitish, LJP president Chirag Paswan tweeted: “I congratulate you on becoming the chief minister and the BJP for making you one… Hope the government will complete its term and you will continue to be the NDA’s chief minister.”

In another tweet, he termed the NDA’s victory in the state polls as “a big win for Prime Minister Narendra Modi”.

Prashant Kishor, once Nitish’s close aide tweeted: “With a tired and politically belittled leader as CM, #Bihar should brace for few more years of lacklustre governance”.