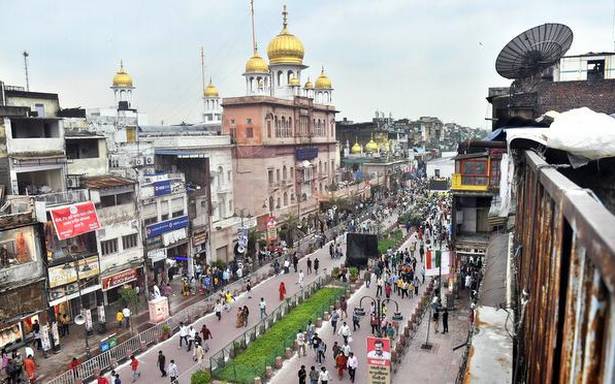 Kejriwal inaugurates redeveloped and beautified stretch, says plan is being worked out to allow street food stalls to stay open till midnight

With the Delhi government’s latest plan, the revamped Chandni Chowk will not only attract tourists during the day but also lure in tourists after sunset. It is planning to allow street food stalls to stay open till 12 a.m. so the “visitors can enjoy the famous market to the fullest”, Chief Minister Arvind Kejriwal said on Sunday.

He inaugurated the revamped market on Sunday following redevelopment and beautification work done by the government over the past three years.

“Chandni Chowk is famous across the world but when tourists would find broken roads, traffic jams and hanging electric wires, which leaves an overall dirty image. Now, after the redevelopment works, people of Delhi are proud of the 1.4 km stretch from Red Fort to Fatehpuri Mosque,” Mr. Kejriwal said.

He added that the stretch has been beautified, the traffic problem has been resolved, CCTVs have been installed, all the hanging electrical wires are underground now.

Mr. Kejriwal said it has come to notice that pedestrians come to the market at night to experience the deep-rooted legacy of the streets so the government is extending services of street food stalls to develop the area into a night tourism spot. “People will be able to enjoy themselves here even after the markets shut till around 12 a.m.,” the Chief Minister said.

Earlier the project was to be inaugurated on April 17 this year but was cancelled due to the second wave of COVID-19.

The Delhi government said the proposal for the redevelopment of Chandni Chowk was approved in August 2018 and the Public Works Department started work on the main project in March 2019.

It said zones have been demarcated and traffic (non-motorised and pedestrian) has been channelised by placing sandstone bollards along the length of the corridor. Also, four toilets and two police posts have been built for public convenience. The area also includes a water ATM, SS dustbin and sandstone seats.