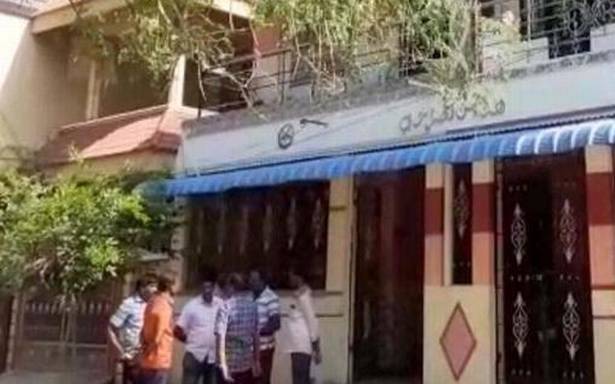 After taking over investigation into the activities of a fundamentalist group on WhatsApp, which goes by the tagline ‘Shahadat (martyrdom) is our goal’, from the district police, the National Investigation Agency (NIA) on Monday launched simultaneous searches on the premises of ten accused who were arrested in connection with a case related to alleged conspiracy to eliminate those who spoke against Islam.

Separate teams also launched searches on the premises of five accused at Muthupettai in Tiruvarur district and a couple of accused in Chennai and Cuddalore, the sources said.

The searches launched around 3 am, lasted more than five hours at the residence of accused M. Mohamed Ribas, 37, a Sri Lankan Tamil at Kilakarai.

Searches on the premises of three other accused, including the prime accused A Sheik Dawood at Devipattinam lasted more than seven hours, the sources said. The teams believed to have seized literature hailing ‘Shahadat’ and ‘jihad’, SIM cards and electronic gadgets, the sources said.

The searches were launched as part of ‘further investigation’ to ascertain whether the group members had established links with Islamic State (IS) or other fundamentalist outfits in the country and abroad, which supported the jihadi movement, the sources said.

After taking over the investigation in February, the NIA teams, acting under an officer in the rank of Deputy Inspector General (DIG) of police re-investigated the case, questioning the witnesses and interrogating some of the accused, the sources said.

The district police busted the group in April, 2018, when the accused assembled at the house of Ribas to allegedly draw strategies to eliminate Hindu leaders who spoke against Islam. After setting up special teams, the police arrested the ten accused in the case and detained some of them under the National Security Act. After the Madurai bench of Madras High court quashed their detention under the National Security Act, the accused were released on bail.

When the district police were pursuing leads to achieve a breakthrough in the BJP office-bearer R Veerabagu assault case, they stumbled upon a lead and busted the group. After forming the WhatsApp group, the members were active for nearly a year, police said.

The NIA also conducted searches at Lalpettai near Kattumannarkovil in Cuddalore district. The team from Kochi, led by a Deputy Superintendent of Police and assisted by the local police, searched the residence of S. Abdul Rashid, 22, of Lalpettai based on warrants issued by the NIA court in Poonammallee in Chennai.

Sources privy to the investigation said that Rashid’s father Sadullah was working in Dubai for the last 10 years. Rashid, an MCA graduate, is said to have worked in a chemical company in Cuddalore before he went to join his father in Dubai a month ago. Rashid came under the scanner after the Ramanathapuram police busted the 10-member hardcore WhatsApp group in the Kilakarai police station limits in 2018. The police said Rashid was active in the WhatsApp group. He along with his father had visited Cuddalore for the elections and returned to Dubai.