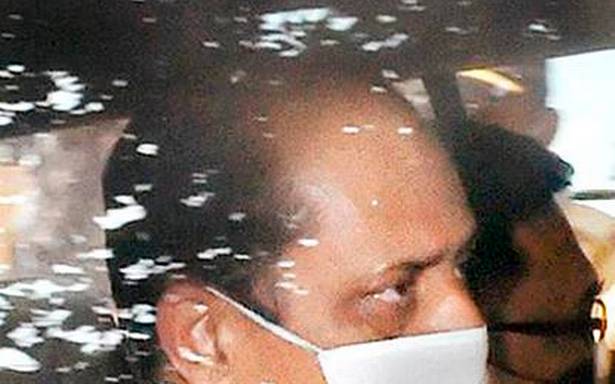 Special Judge A.T. Wankhede said Mr. Vaze can be in the jail’s special hospital cell and is allowed home food. The court recorded that Mr. Vaze can be taken to State-run J.J. Hospital for check-up when needed.

Mr.Vaze has been charged with Sections 286 (negligent conduct with respect to explosive substance), 465 (punishment for forgery), 473 (making or possessing counterfeit seal, etc., with intent to commit forgery punishable otherwise), 506 (punishment for criminal intimidation), 120B (punishment of criminal conspiracy) of the Indian Penal Code, and several sections of the Unlawful Activities Prevention Act and the Explosive Substances Act.

An SUV car was found with 20 gelatin sticks on February 25 outside industrialist Mukesh Ambani’s residence. The police said the car was stolen from the Airoli-Mulund bridge on February 18.

The car’s owner, Mansukh Hiran, an auto parts dealer, was found on March 5 in Kalwa creek. The case was transferred from the Maharashtra Police to the NIA on March 8. Mr. Vaze was arrested at 11.50 p.m. on March 13 for his “role and involvement in placing explosives laden vehicle near Carmichael Road”.