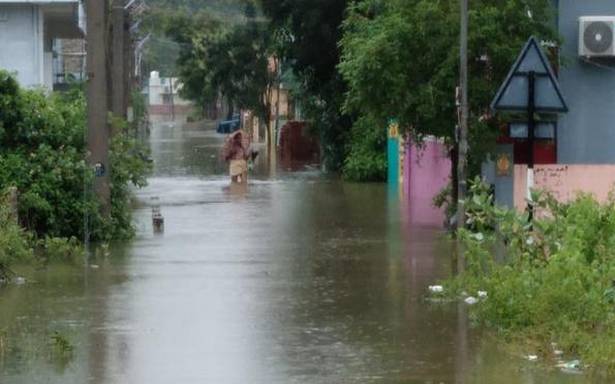 People from the affected areas have been shifted to safe places.

Newly developed areas in Kanniyakumari district have been severely affected by the heavy rain and they are marooned in water.

Water has entered places such as Nangai Nagar, Nanjil Nagar, Azad Nagar in around Nagercoil town as they have been constructed on wetlands, particularly paddy fields. Most of the new settlements are on banks of canals, rivers and other water bodies.

“The government should take a policy decision that it will not allow constructions on paddy fields. Neighboring Kerala has already enacted a law and we need a similar legislation. District collector’s notification is not enought,” said former Minister N. Suresh Rajan, who visited the affected areas.

He said huge commercial buildings in Oluginachery on the banks of Palayar and along the highways have prevented flow of water.

“The housing constructions behind these commercial buildings added further problem. I could visit the areas in the morning. But in the evering it was cut off from other areas because of heavy flow of water,” Mr Suresh Rajan said.

People from the affected areas have been shifted to safe places.

Nagercoil MLA M.R. Gandhi said paving roads on waterways when new houses were constructed was one of the reasons for the flooding.

He said unlike elsewhere, Kanniyakumari was witnessing construction of independent houses and the roads laid in these new settlements were also very narrow.

"Failure on the part of the government to desilt water bodies and remove encroachments also has contributed to the flooding. We have somehow managed a breach in Vempanoor irrigation pond. If it breaks, the entire village will be submerged,” he said.