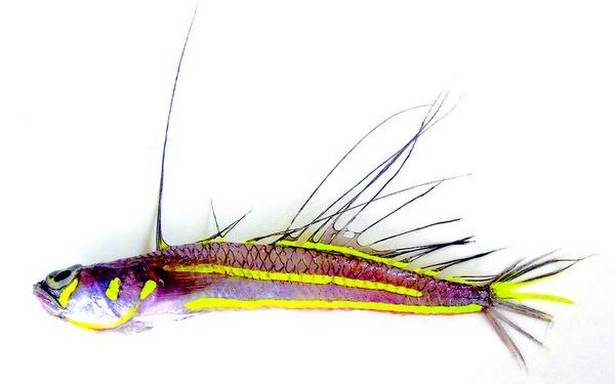 Called Pteropsaron indicum, it is the first one of the genus recorded in Indian waters

The deep waters of the Lakshadweep sea off the Kerala coast are home to an unusual species of fish with a unique colour pattern and an interesting behaviour that allows it to communicate with others of the same species by flipping its highly specialised dorsal fins.

Scientists from the University of Kerala and the Ocean Science Foundation, USA have reported the discovery of the new species of signal fish, the first one of the genus recorded in Indian waters.

The species named Pteropsaron indicum was collected by trawlers at a depth of 70 metres during a marine biodiversity survey.

The new fish sports three distinct bright yellow bands on a pale greyish pink background. The body and head are criss-crossed with dark margins of large-scale pockets. It is also characterised by three extended dorsal fin spines, a high number of vertebrae and a relatively large body size. Signal fishes are tiny and fragile and are often found in waters below 50 m. According to the authors, Pteropsaron indicum is one of the distinctly larger species of signal fish.

Signal fishes are a poorly studied group of benthic species found in deep sandy habitats, usually close to coral reefs. They are known to flip up their extended dorsal fins to signal each other. “The discovery of the species indicates the presence of patchy corals off the Kerala coast and therefore with a lot of conservation value,” says Dr.Biju Kumar.

The collected type specimens measuring 82 and 84 mm in length have been deposited at the Western Ghat Field Research Centre, Zoological Survey of India, Kozhikode, and the museum collections of the university department of Aquatic Biology and Fisheries.