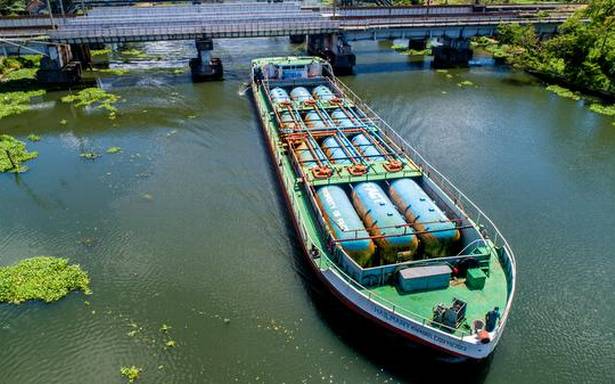 Close calls involving barges on National Waterway-III, the latest being at Champakkara on Sunday, has prompted stakeholders to heighten their alert, with the Inland Waterways Authority of India (IWAI) shooting off letters to barge operators and the Kerala Maritime Board (KMB) to ensure adherence to communication protocol between vessels and to deploy skilled crew members.

The crew members must be familiar with the peculiarities of waterbodies their barges pass through. Sunday’s near-miss incident (involving a barge carrying rock phosphate to Ambalamugal and an ammonia carrier barge proceeding to Eloor) could have been avoided if crew members had communicated the position of each vessel well in advance while approaching the narrow waterbody at Champakkara, said Mathew George, Director of IWAI, which owns and maintains the waterway.

This is because it is tough to widen the corridor by acquiring land in the densely-populated area. A copy of the letter sent to the KMB has been forwarded to the District Collector (in his capacity as Chairman of the District Disaster Management Authority) to convene a meeting of stakeholders to prevent such incidents that could turn disastrous in case of collision, he added.

Unlike roads, waterways are considered to be the safest mode to carry chemicals, fuel, and other hazardous cargo in bulk. It is also the most energy-efficient way to transport cargo.

The general secretary of Kerala Maritime Organisation, A.M. James, who owns an Italy-registered barge that transports liquefied ammonia, explained how utmost caution must be exercised, since barges carry sulphuric acid, phosphoric acid, and rock phosphate and sulphur through Kochi’s waterways. “Crew members must be experienced, since many areas are narrow and have curves in abundance. They ought to up their vigil since 23 Water Metro ferries, each carrying up to 100 passengers, are set to commence services in early 2022,” he said.

In the event of near-misses, crew members often trade charges, claiming that the other did not respond to telephone calls. In this context, they must adhere to navigation rules, which include communicating by using powerful horns, Mr. James added.

In the meantime, stakeholders in the sector demanded caution against operating single-skin (those with a single-layer of hull) barges which could suffer leakage in case of collision. Double-skin vessels will ensure added protection even in case a vessel runs aground, they said.