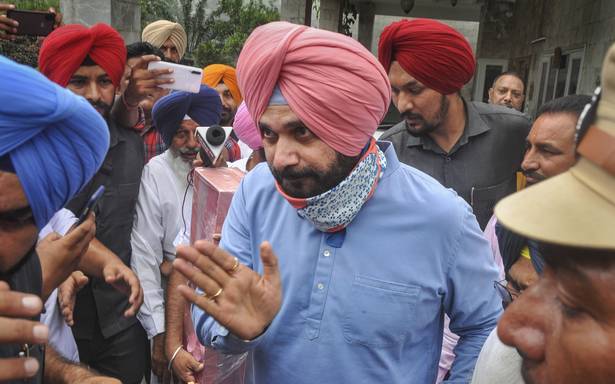 Sonia speaks to party MPs ahead of decision.

Ms. Gandhi is learnt to have individually spoken to MPs from Punjab on the issue of elevating Mr. Sidhu. A senior leader from Punjab confirmed it to The Hindu, and said the Congress chief seemed “determined” on Mr. Sidhu’s elevation.

“Ms. Gandhi spoke to the MPs individually and each one of them was opposed to the idea of making Mr. Sidhu the PCC chief,” the leader said.

The decision came at the end of a day of hectic political activity in Punjab and Delhi.

Officially the meeting was to formulate their position on the call given by the Samyukt Kisan Morcha to raise the farmers’ issue and not allow any other business in the House during the Monsoon Session unless the farm laws are repealed.

In Punjab, earlier in the day, at least 10 MLAs came out openly in support of Chief Minister Amarinder Singh, urging the high command “not to let him down”.

Senior MLA Sukhpal Singh Khaira, sharing a statement on behalf of MLAs, urged the high command not to let down the Chief Minister because of whose unrelenting efforts the party stands well entrenched in Punjab.

“There was no doubt that the appointment of PCC chief was the prerogative of the party high command but at the same time washing dirty linen in public has only decreased the party graph during the last couple of months,” said the MLAs in the joint statement.

They said that Capt. Singh commanded “immense respect” across different sections of society, particularly the farmers for whom he even endangered his chair as Chief Minister while passing the 2004 Termination of Waters Agreement Act.

They said that the Chief Minister stood as a “tall leader amongst the Sikhs” because of his principled stand during testing times.

“Since merely six months were left for the elections, pulling the party into the different directions will only harm its prospects in the 2022 polls,” they said.

The MLAs also supported Capt. Singh’s demand that Mr. Sidhu who had made numerous tweets against him and the government should tender a public apology so that the party and government could function in tandem.

The MLAs offered a word of caution to Mr. Sidhu, who they said was a celebrity and was no doubt an asset to the party but condemning and criticising his own party and government in the public has only created a rift in the cadres and weakened it.

“We hope the party high command would take cognisance of the suggestions and will definitely keep in mind the status, contribution and background of Captain Amarinder Singh in mind while making vital decisions for the party,” they said.