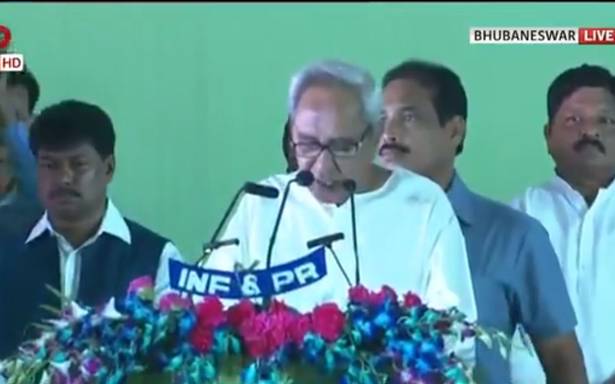 Biju Janata Dal (BJD) president Naveen Patnaik was sworn-in as Chief Minister of Odisha for the fifth consecutive term in Bhubaneswar on Wednesday.

Mr. Patnaik and his ministerial colleagues were administered the oath of office and secrecy by Governor Ganeshi Lal. A large number of dignitaries attended the ceremony.

“It’s a nostalgic and personal journey for me to reminiscence the past 19 years. Today while I take oath of office for the fifth term, I humbly accept the responsibility that comes with the faith my 4.5 crore family members have reposed on me, yet again,” tweeted Mr. Patnaik soon after taking oath for a record fifth time. He has been terming people of Odisha as his family members since long.

The portfolios were to be allocated by Mr. Patnaik later in the day.

Mr. Patnaik was sworn in as the Chief Minister for the first time on March 5, 2000 when the BJD came to power with the Bharatiya Janata Party as its alliance partner.

Mr. Patnaik, who maintained equidistance from Congress and BJP, contested and won the elections in 2009 without an alliance. The BJD had registered an emphatic victory in 2009 by securing 117 seats in the 147-member State Assembly.

The BJD also fought the elections this time without any alliance partner and won 112 of the 146 Assembly seats for which elections were held simultaneously with the Lok Sabha polls. Polling has been adjourned in the Patkura seat due to the death of the BJD nominee.

This is for the first time the BJD government headed by Mr. Patnaik will have the BJP as the main opposition in the State. The BJP has bagged 23 seats, and the Congress has won nine seats.