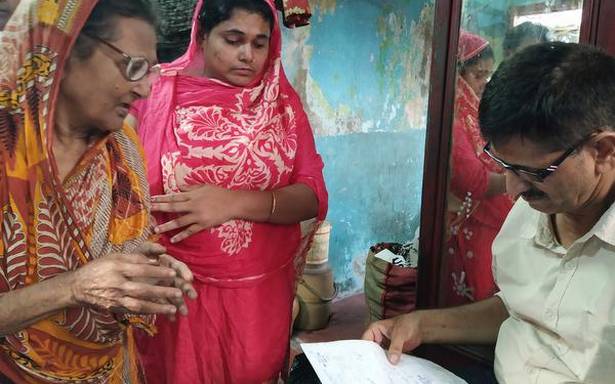 For nearly two years Ashgar Ali alias Sheikh Ashgar has been jailed in Goalpara detention centre, following an anomaly in his father’s name.

A Kolkata-born carpenter, based in Assam, is the first victim of the National Register of Citizens in south Bengal. Ashgar Ali, 50, born in the Park Circus area of central Kolkata, has been incarcerated in a west Assam detention centre for an anomaly in his father’s name. Family members in Kolkata furnished various papers on June 2 to establish that Mr. Ali was born in Kolkata.

“Our father’s name is Sk Moral. But since Moral is an unusual surname and he was often questioned if he is actually a morol (village head), he changed his name to Md Jarif. Hence, some of the papers identify him as Sk Morol, while some as Md Jarif,” explained Arshad Ali, his younger brother. While Mr. Jarif filed an affidavit in a Judicial Magistrate court in the city in December 2015, declaring that he is a Kolkata-born Indian national, his son was detained in Guwahati on July 14, 2017 for the difference in his father’s name.

“Ashgar Ali’s son is in Class VIII and wife is suffering from acute arthritis…they are in a terrible situation. The problem occurred as the family is entirely uneducated,” said Zishan Ali, a close relative of Mr. Ashgar Ali, from Guwahati.

“We hear that that according to the Court order, if his foreign nationality cannot be established in three years, he will be released. But for one’s father’s mistake, is it reasonable to detain a person for three years?” asks Mr. Zishan Ali.

Mr. Ashgar Ali, who has working in Assam for over two decades now, has been jailed in the Goalpara detention centre in west Assam. But it is “actually Goalpara district jail,” said Mr. Zishan Ali.

Mr. Ashgar Ali’s parents and other family members live in abject poverty in a Park Circus slum in central Kolkata. His two brothers work as tailors, while the 83-year-old father suffers from a stomach tumour. The mother, Jubeda Begum, is frail and losing sight in both eyes. She cried incessantly while talking about his son. The family is worried about the fresh NRC in Bengal.

“We have done everything that is possible to rectify the arbitrary name change of our father. But could you tell us what else we should do to ensure that the entire family does not go to jail like our brother, if NRC is indeed started in Bengal?” asked Afrin Begum, one of Mr. Ashgar Ali’s four sisters.