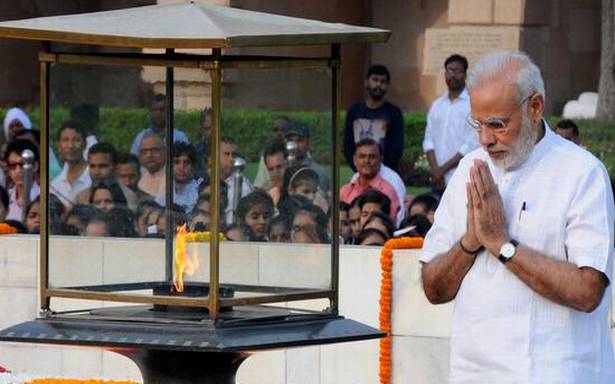 The Prime Minister says ‘Partition Horrors Remembrance Day’ is in memory of struggles and sacrifices of people.

Prime Minister Narendra Modi on Saturday declared August 14 will be observed as ‘Partition Horrors Remembrance Day’ to acknowledge the pain undergone by Indians due to the partition of India in 1947.

Taking to micro-blogging site Twitter, he tweeted, “Partition’s pains can never be forgotten. Millions of our sisters and brothers were displaced and many lost their lives due to mindless hate and violence. In memory of the struggles and sacrifices of our people, 14th August will be observed as Partition Horrors Remembrance Day”.

He added that the day, remembered for India’s partition into two countries, India and Pakistan, would remind Indians of the need to “remove the poison of social divisions”.

“May the #PartitionHorrorsRemembranceDay keep reminding us of the need to remove the poison of social divisions, disharmony and further strengthen the spirit of oneness, social harmony and human empowerment,” he tweeted.

The Union Home Ministry on Saturday evening issued a notification declaring that August 14 will be observed as Partition Horrors Remembrance Day.

In a notification, the Home Ministry said the people of India, while celebrating “Azadi ka Amrit Mahotsav”, will salute those sons and daughters of the country who had to sacrifice their lives during the partition of India.

"…the Government of India has decided to declare 14th August as Partition Horrors Remembrance Day in remembrance of the people who lost their lives during the partition.

Opinion | The train to India

“Therefore, the Government of India declares 14th August as Partition Horrors Remembrance Day to remind the present and future generations of Indians of the pain and suffering faced by the people of India during the partition,” the notification said.

As soon as Mr. Modi made the announcement, BJP general secretary (organisation) tweeted that it was a laudable attempt to remember the tragedy sought to be whitewashed by proponents of “Nehruvian legacy.”

That time in history when Partition happened.  | Photo Credit: The Hindu archives

While no details were shared on any memorial events to be held on the day, the announcement comes on the eve of India’s 75th Independence anniversary. A year-long series of events connected to the anniversary, ‘Amrit Mahotsav,’ has been lined up, including recording the national anthem by ordinary citizens and uploading them on the Rashtrapati Bhavan website.