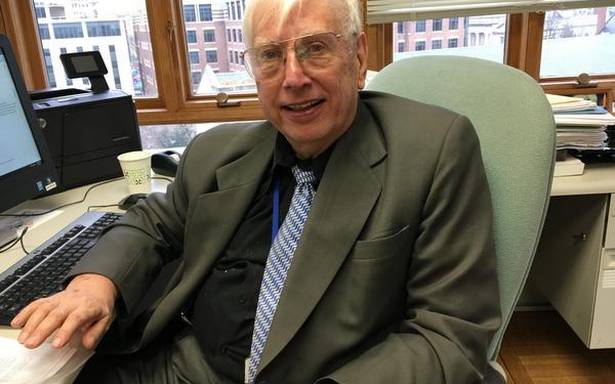 India too complex and diverse for such dramatic change, says scholar.

Walter Andersen, Senior Adjunct Professor of South Asia Studies at Johns Hopkins School of Advanced International Studies and author of books on the RSS including The Brotherhood in Saffron and RSS: A View To The Inside spoke on the poll results of 2019 and its implications for the Sangh Parivar. Excerpts:

How do you look at the results in terms of a long-term trend in Indian politics?

I am not among the people who consider this mandate as a dramatic inflexion point for the country, and while there will be Hindu-centric assertions in certain matters, it is not the end of secularism in India as some people fear. India is too complex and diverse for such a dramatic change, and this complexity is also its strength. It means that things will proceed at a relatively slow pace compared to say, China, were things move faster because there is an authoritarian regime. In India, things move slowly but change is more permanent, less dramatic.

How do you see the relationship between the RSS and Prime Minister Modi after a result of such magnitude? Do you think there will be a decisive push for construction of a Ram Temple ?

The relationship between Prime Minister Modi and RSS chief Mohan Bhagwat is fairly good, perhaps because they are closer in age and have some shared experiences, unlike Mr. Vajpayee and late RSS chief K. Sudarshan. Mr. Bhagwat is by nature a diplomat. I know of specific instances where he managed a mediated compromise on certain issues that had the potential of turning contentious. There were reports when Mr. Modi met Mr. Bhagwat after the polls that some “instructions” were given to the former, but that’s not the case at all, as it’s not characteristic of Mr. Modi nor Mr. Bhagwat. In the last government, and in future, there will be more of coordination meetings initiated by Prime Minister Modi.

The RSS has had a suspicion of a “cult of personality” as they believe that fundamental change comes from below and not from the top, that in and as itself is a constraint on how much they get involved in power politics. They expect to have inputs in the next five years but not the way others envisage.

Specifically with regard to Ram Janmabhoomi, it’s obvious that the Sangh Praivar including BJP want a temple but it was not an overwhelming issue in the poll campaign. Both Mr. Modi and Mr. Bhagwat asked for patience with the court process and the new leadership at the Vishwa Hindu Parishad (VHP) after the exit of Praveen Togadia is also more cautious. The gait on this is a more elephantine, lumbering one.

What other core issues of the Sangh Parivar do you see being pushed in this tenure?

That is going to be complicated; the RSS now has over 100 organisations of diffused and specific interests that are attached to it. But going by the Vijay Dashami addresses by Mr. Bhagwat, populist economic orientation will be preferred, like the Bharatiya Kisan Sangh’s call for better value for crops etc.

The big challenge before the government is job creation for which Foreign Direct Investment (FDI) may be pushed, despite reservations by the Swadeshi Jagran Manch. The RSS has become neutral over the issue, though not enthusiastic over FDI. In that scenario it will be interesting to see how this pans out going forward.

In terms of international standing, where does this mandate place Prime Minister Modi?

Often, there is a misconception in the international press, people getting the impression that Mr. Modi is looked at suspiciously because of this populist sweep. India is a complicated country and yes there are potential problems such as the fact that the hard Right will get energised, in such a situation, the government will have to deal with it firmly. Reactions among foreign governments have, however, been uniformly positive to a decisive government elected democratically. Non Resident Indian communities, which the BJP has done much for in terms of their interests is an advantage the BJP has, which many parties don’t.

Is the surge in support that the BJP got in these polls from backward communities significant? Will it be a long-term support or a single election phenomenon?

That’s been building up for a while. Prime Minister Modi’s own image and background as belonging to the backward community with a less than affluent background and inclination to be favourable with regard to poverty alleviation helps in that regard. There has also been a subalternisation of the BJP’s support base, with Other Backward Classes (OBCs) rising steadily in the party hierarchy and even within the RSS. The BJP will try and keep this support.