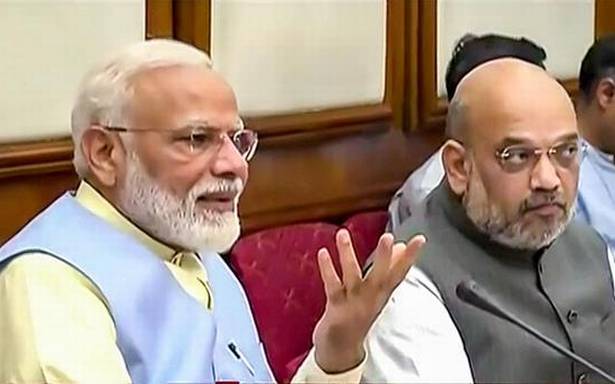 Farmers welfare was at the top of the agenda at the first meeting of the new Union Cabinet held by Prime Minister Narendra Modi, fulfilling major promises from the BJP’s poll manifesto.

The Cabinet cleared proposals to extend the ₹6000 per annum income support scheme to all land-owning farm families, create contributory pension schemes for small farmers and traders on the lines of the existing scheme for unorganised sector workers and control and ultimately eradicate foot and mouth disease among livestock.

The Pradhan Mantri Kisan Samman Nidhi (PM-KISAN) was originally the big-ticket announcement of the last budget before the elections. It promised Rs. 6000 per year as income support to all farm families who owned two hectares of land or less, acknowledging that farmers faced declining incomes, and was meant to cover 12 crore beneficiaries. In its manifesto for the 2019 Lok Sabha polls, the BJP had promised to extend the scheme to all eligible farm families, irrespective of the amount of land they owned.

“A number of states have not sent the information on their farmers, so they have not got the benefits. However, more than 3 crore farmers have already received benefits under the scheme,” said newly inducted Agriculture Minister Narendra Singh Tomar, briefing journalists after the Cabinet meeting. The extension to a total of 14.5 crore farmers means that the scheme will now cost the exchequer Rs. 87,000 crore each year.

“This shows the sincerity of the government in fulfilling its promises, not just for attracting votes at election time, but for the good of the farmers of this country,” Mr. Tomar added.

Prime Minister Narendra Modi at his office in New Delhi on Friday.

Small farmers and retail traders will now benefit from new contributory pension schemes, similar to the scheme for unorganised sector workers which was introduced in the last budget.

The Pradhan Mantri Kisan Pension Yojana aims to cover five crore small and marginal farmers, with the government expecting to spend ₹10,774.5 crore on the scheme over a three year period. The traders pension scheme will cover three crore shopkeepers, retail traders and self-employed persons with a GST turnover below ₹1.5 crore.

Both schemes have an entry age of 18-40 years, and subscribers will contribute between ₹55 to ₹100, with the government matching the amount. Once they cross 60 years, they will receive a pension of ₹3,000 per month.

The scheme for control of foot and mouth disease and brucellosis among all types of livestock has been implemented on a 60:40 cost-sharing basis between Centre and states so far. The Centre has now decided to pay for the scheme entirely, and approved an outlay of Rs. 13,343 crore over the next five years. About 30 crore bovines – cows, bulls and buffaloes – as well as 10 crore sheep and goats, and 1 crore pigs will be covered by the scheme.