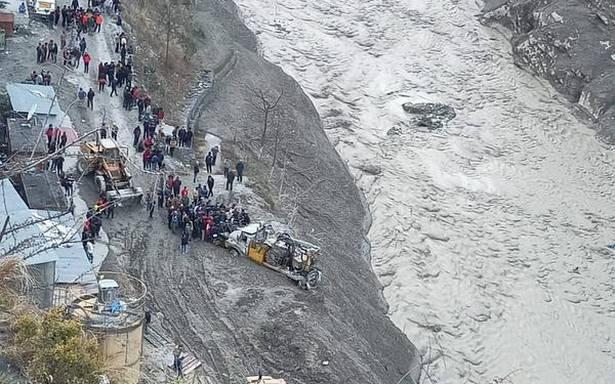 The water level of the Dhauliganga river at Joshimath flowed at a perilously high level, breaching all records, Central Water Commission officials said after a part of the Nanda Devi glacier broke off in Uttarakhand’s Chamoli district leading to massive floods.

The glacial burst triggered an avalanche and a deluge in the Alaknanda river system that washed away hydroelectric stations and trapped more than 100 labourers who are feared dead. The intensity of the river’s flow in a short span of time was such that it engulfed whatever came in its way.

This was a grim reminder of the Kedarnath deluge of 2013 which led to widespread devastation in the ecologically fragile Himalayan region.

However, by 6 p.m. on February 7, the water level of the river had reached the normal levels recorded a day before, said Rajesh Kumar, the superintendent engineer (Upper and Middle Ganga division) of the Central Water Commission. He said water levels have started receding.

In Nandprayag, at the lower stretches of the river, the water level at 6 p.m. was 840.40m. A day before, it was 848.30m at 1 p.m. Mr. Kumar said the situation was similar in Rudraprayag, Srinagar, Devprayag, Rishikesh and Devprayag.

The water level at the Srinagar Hydroelectric Project was also at the Mean Draw Down Level which helped accommodate excess flow from the upper stretches. This will be released slowly, Mr. Halder added.

The sudden flood in the middle of the day in the Dhauliganga, Rishiganga and Alaknanda rivers — all intricately linked tributaries of the Ganga — triggered widespread panic and large-scale devastation in the high mountain areas.

Two power projects — NTPC’s Tapovan-Vishnugad hydel project and the Rishi Ganga Hydel Project — were extensively damaged with scores of labourers trapped in tunnels as the waters came rushing in.

At least 12 men were rescued safely from a tunnel in the Tapovan project but at least 125 were still missing. As night fell in the ecologically fragile Himalayas and rescue work in the difficult to access areas became more difficult, there were fears they may be dead.