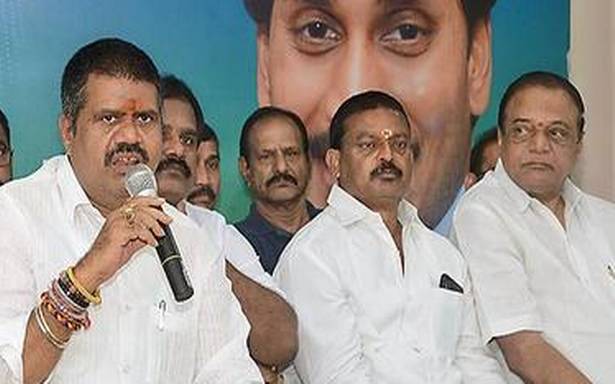 Addressing the party workers here, Mr. Srinivasa Rao alleged that Mr. Naidu had launched a vilification campaign that KIA Motors was moving out of Andhra Pradesh.

He also blamed the Leader of Opposition for “rumours on eviction of a reputed IT company from Millennium Tower and sanctioning of funds to finish the construction on another tower at Rushikonda”.

“Mr. Naidu must prove that a big unit has decided to leave Visakhapatnam. People are supporting the decision taken by Mr. Jagan Mohan Reddy to make Visakhapatnam the Executive capital,” he said.

Mr. Rao dared the TDP MLAs who were not interested to set up Executive capital in Visakhapatnam should tender resignation from the Assembly membership to seek re-election to know the actual pulse of the people. Visakhapatnam district has elected 11 YSRCP MLAs out of 15 leaving the four seats in the city to the TDP. claimed that people were favouring the initiatives taken for decentralisation to ensure balanced development of the entire State. Referring to the allegations made by Mr. Naidu and other TDP leaders that YSRCP MP V. Vijay Sai Reddy had indulged in ‘insider trading’, and purchased large patch of land in and around the cityMr. Srinivasa Rao described it as a ‘figment of imagination’.

The Minister said the TDP leaders were apprehensive of their future as the YSRCP government had started the process of “exposing the corruption and shady land deals in which they were involved”. He said most TDP leaders would be benefited due to the decision on Executive capital as they own valuable lands, theatres and hotels in Visakhapatnam.