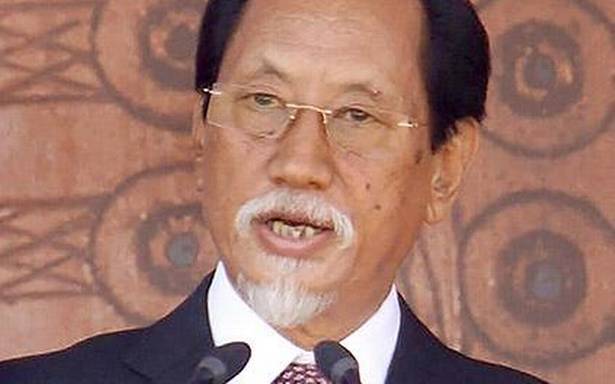 He said he met Union Home Minister Amit Shah on September 19 in Delhi and one of the reasons for Thursday’s meeting was to convey the Centre’s “one solution” message.

“Having understood that there will be only one solution, we need to deliberate and support the peace process, strengthen the negotiations and facilitate the journey towards achievement of this one solution in the earliest time possible. Looking back at history, we must come to an understanding that our achievements and our failures are all collective. We need to cross the bridge of blame and move towards a matured approach of collective responsibility for all our achievements and failures,” he said.

The Naga talks hit a roadblock in August this year after the NSCN(IM) leadership refused to hold any dialogue with Naga interlocutor R.N. Ravi who is also Nagaland’s Governor. A team of Intelligence Bureau officials were deputed to hold forth the discussions with National Socialist Council of Ngaland-(Isak Muivah). Mr. Ravi and the NSCN(IM) signed a framework agreement on August 3, 2015 in the presence of Prime Minister Narendra Modi. The NSCN(IM) has been demanding a separate constitution and flag for the Nagas and the assimilation of all Naga-inhabited areas in Assam, Arunachal Pradesh and Manipur. In 2017, Mr. Ravi included more Naga groups in the dialogue process and signed a preamble with the seven Naga National Political Groups.

“If Nagas as a people are to achieve progress and realise our aspirations as a people, we must come together like today. We must also accept that our biggest challenge today is division. We all know that this situation is only leading to self-destruction. During the British era, a divide and rule policy was used to govern, which was inherited by India, and till today our society is thoroughly divided, which has created too many groups and organisations leading to different opinions and voices. The only way forward is unity and oneness as One Naga Family,” the Chief Minister said.

Following the consultative meeting, the participants including the Nagaland government adopted a resolution appealing the negotiating groups to come together towards achieving one solution for one people as early as possible. BJP MLA Mmhonlumo Kikon, who steered the meeting, said it was affirmed to work in a collective manner to facilitate the peace process and strengthen the negotiations for early realisation of the desired one solution in a transparent manner.

The Opposition Congress party and the Naga People’s Front boycotted the meeting. The Congress released a statement that the Chief minister should step down as the final agreement was to be inked soon and he should avoid being an obstacle in paving way for post solution arrangement.

10/15/2020 India Comments Off on Naga issue | Only one solution is message from Centre, says Neiphiu Rio
TV & Movies