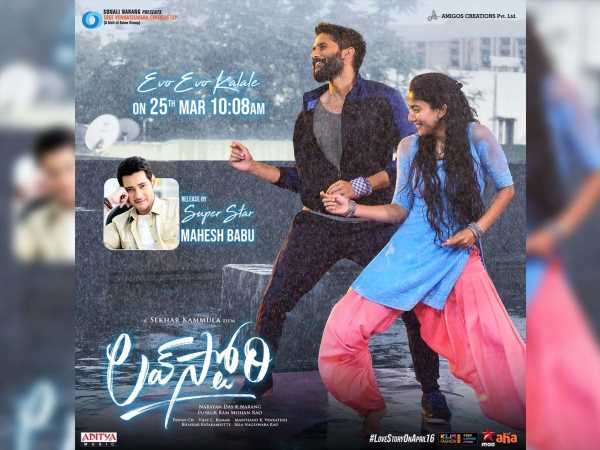 Sekhar Kammula is busy in the promotional activities of his upcoming romantic drama Love Story in which Akkineni Naga Chaitanya and Sai Pallavi are working together. According to the latest buzz,  Sekhar Kammula’ magnum opus Love Story is based on honour killing.

Now according to the latest update, Telugu superstar Mahesh Babu has extended his support and he is all set to launch the  fourth song Evo Evo Kalale tomorrow on 25th March. The makers of Love Story confirmed the same by releasing a new poster on Twitter. Coming on the post, both Naga Chaitanya and Sai Pallavi are seen grooving in the rain.

Naga Chaitanya is playing the role of a zumba fitness instructor in Sekhar Kammula’ directorial venture Love Story.   The sources revealed that Majili star brushed up his zumba dancing skills to play his part  this romantic drama,  which is backed by Narayan Das K Narang and Puskur Ram Mohan Rao under their banners Amigos Creations and Sree Venkateswara Cinemas whereas the music is scored by Pawan Ch. Love Story is slated to hit the theaters on 16th April 2021.

On the otherside, Naga Chaitanya is currently working with Vikram K Kumar for Thank You whereas Sai Pallavi is sharing the screen space with Rana Daggubati in  Virata Parvam.