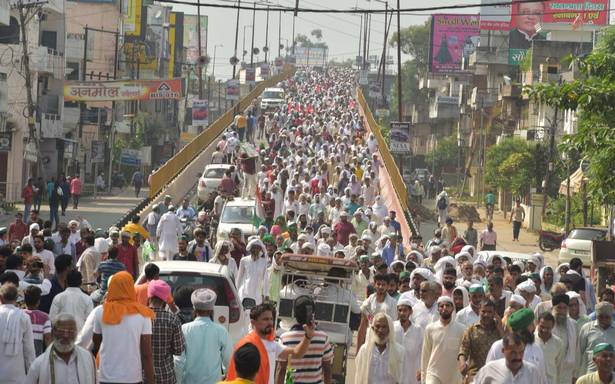 Some pro-BJP farmers rest hopes on Yogi govt. but disillusioned with Modi

As lakhs of farmers gathered in Muzaffarnagar on Sunday and listened to their leaders preach Hindu-Muslim unity, some vowed that the damaging farm policies of the last few years would ensure that they voted on the basis of economic interests, not their religion. Others, however, still seem to be hoping for the BJP to change its policies and mentioned the lack of a strong alternative party to vote for.

For farm leaders and non-BJP politicians, the challenge will be to ensure that the strong farmer identity forged over the last few months of protest is not disrupted by the BJP’s appeal to Hindu identity in the six months before the elections.

“The BJP fooled us last year by bringing up the Pulwama issue and speaking of national interest, but we will not be fooled again. I am a farmer first, a Jat second and then only a Hindu. Farmers interests are national interests,” said Birender Singh, who owns three acres in the Bulandshahr district.

By chanting religious slogans of both Hindus and Muslims during the rally, Bharatiya Kisan Union’s Rakesh Tikait underlined the secular nature of the protest. Though the general belief is that this would help win over a large section of Muslim farmers who parted ways with the BKU after the Muzaffarnagar riots, Mannan Balyan, a Muslim from the Balyan Khap who is also a leader of the Azad Samaj Party, insisted that “Muslim farmers were always with the BKU, it was the Jat farmers who parted ways after the Muzaffarnagar riots”. He said only 60% of Jat farmers have come back, with the rest still allied with the BJP.

Digpal Singh, an aged farmer from Aligarh with two acres, said they had seen through the BJP’s policy to create fear of Muslims. “It is sad we realised only when we were cheated with farm laws and the increasing input cost that is threatening to push our children out of agriculture.” Now, he said, there is an attempt to alienate farmworkers from landowners by distributing free ration. “This new attempt at dividing society could have dangerous repercussions in the long run,” he said.

“The BJP promised us Ram temple, but what is the use of a Ram temple if we cannot afford the basics of bijli, paani, tel [electricity, water, oil]? What is the use if our children cannot get any jobs?” asked a disillusioned Ramesh, from Haryana’s Charkhi Dadri district. Sanjay Tomar, a young farmer from Mathura, said for the first time they were getting a feeling that “prajatantra kam ho raha hai” (democracy is diminishing).

However, others were willing to give the BJP a chance given its nationalist agenda and ability to keep the “Muslims in control”, but blamed the central leadership for their woes.

“We have had no issues with Yogi. With the Taliban raising their head in the neighbourhood, we need a strong government in the State,” said Ranvir Singh, a farmer from Bulandshahr. He hoped that with pressure mounting, the State government would increase sugarcane prices but wondered whether that would be enough considering the high rise in input costs. “I feel the central leadership of BJP has let the farmers down. We are still waiting for Rajnath Singh,” he said.

“Modiji has ignored our demands for nine months. But if he listens to us even now, we will give him our vote again. But if not, we will vote for whomever listens to our demands, or we farmers will stand for elections ourselves,” said Rishipal Singh from Aligarh.

Mr. Tikait’s highlighting of issues such as pensions for teachers and policemen as well as permanent positions for sanitation workers was also seen as an attempt to cross not just religious but also caste and social barriers. The ASP, which is headed by Bhim Army chief Chandrasekhar Azad and has been courting Dalit votes, supported Sunday’s mahapanchayat.

Many of the farmers that The Hindu spoke to were clear that they support the BKU for farmers’ issues but will vote for the Rashtriya Lok Dal, the alliance partner of the Samajwadi Party for the forthcoming elections.

A senior RLD leader requesting anonymity said the BKU “could not afford to go political” despite the success of the mahapanchayat. “The moment the BKU takes a decision on direct political participation, the movement will come to a halt and the Tikaits will face a revolt in villages,” he said. It will be seen as a sellout to the BJP, something the BKU leadership could ill afford, he said. Instead, farmer leaders including the Tikait family members could be offered SP-RLD tickets.