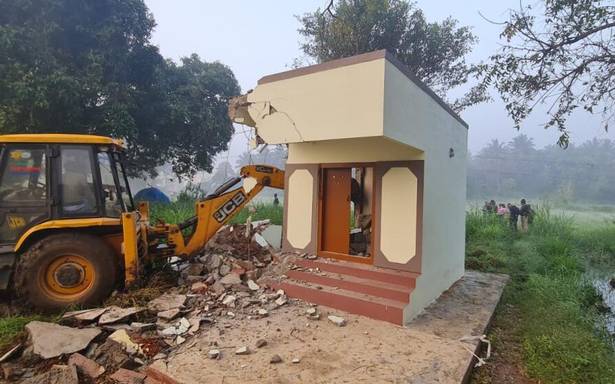 Mysuru Urban Development Authority (MUDA) has reclaimed nearly 50 acres of encroached land in the city and surrounding areas in the last six months.

The cash and land-strapped MUDA has launched a series of clearance drives to evict unauthorised occupants from its land, which resulted in reclaiming 50 acres. The value of the land has been pegged at ₹500 crore. MUDA anticipates recovery of another 50 to 60 acres in the coming months.

In continuation of the operation, authorities evicted petty shops and demolished a few unauthorised structures, including tea stalls, eateries and 50 sheds, on MUDA property on January 7. The operation took place at Devanoor 3rd stage close to Narayana Multispecialty Hospital.

‘’Over the years, MUDA acquired land from farmers and other landlords after compensating them at the prevailing rates as stipulated by the government. But, in some cases, the owners have questioned the acquisition process or have sought higher compensation, and have filed cases against the MUDA,” said H.V. Rajeev, Chairman, MUDA.

These cases are now being cleared one by one. The drive to reclaim encroached land was consequent to a court ruling in favour of the MUDA in some of the cases.

Mr. Rajeev said there were still scores of cases related to another 75 acres but the MUDA is confident of the decision going in its favour in a majority of the cases.

However, the land that has been reclaimed by the MUDA is not available as a single swathe. Authorities intend to use them for a group housing scheme or create civic amenities sites besides develop them as individual plots.

Group housing is on top of the agenda of MUDA, which is opting for the vertical growth model due to paucity of land. Mr. Rajeev said horizontal expansion of the city is unsustainable as it entails large-scale conversion of agricultural land for non-agricultural purpose. Unbridled horizontal expansion will stretch our limited resources and hence the MUDA is opting for group housing scheme. It will construct multi-storey apartments on the lines of flats constructed by Bengaluru Development Authority (BDA).

The demand-survey for the project has evoked tremendous response from the public. The focus will be on constructing 2BHK and 3BHK apartments to cater to people from low-income and middle income groups, according to MUDA authorities.