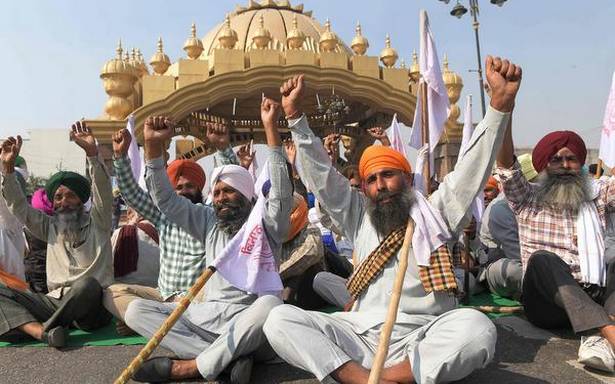 U.S. President Donald Trump said without evidence on Thursday that if “legal” votes are counted he would win the presidential election, in a signal he is in no mood to concede to Democrat Joe Biden.

America awoke on Thursday morning to another day of uncertainty around the winner of the presidential election, even as Joe Biden appeared to be on the verge of reaching the 270 of 538 Electoral College votes needed to win the White House, after he won Michigan and Wisconsin.

Stepping up their protests against the three recently-passed agriculture laws and the proposed Electricity Amendment Bill, farmers in 18 States blocked roads and staged demonstrations at more than 2,500 locations on Thursday, according to leaders from the All India Kisan Sangharsh Coordination Committee (AIKSCC), who had called for the “chakka jaam” agitation.

Former Chief Secretary of Delhi M.M. Kutty was on Thursday appointed chairperson of the Commission for Air Quality Management in National Capital Region and Adjoining Areas, according to a Personnel Ministry order.

The Bombay High Court on Thursday issued notice to the Central Bureau of Investigation (CBI) after ARG Outlier Media Limited Group that owns Republic TV sought a stay to the investigation carried out in the alleged Television Ratings Points (TRP) manipulation scam.

Do recent indicators hint at a steady economic revival? | The Hindu Parley podcast

After India’s economy collapsed in the first quarter of 2020-21 following the nationwide lockdown imposed to curb the COVID-19 pandemic, some economic indicators from September and October, from power consumption to GST collections, suggest that things are improving.

All insults not offence under SC/ST Act: Supreme Court

All insults or intimidations to persons belonging to Dalit or tribal communities will not be an offence under the Scheduled Castes and Scheduled Tribes (Prevention of Atrocities) Act, the Supreme Court said in a judgment on Thursday.

The Magistrate Court in Alibag, Maharashtra, recorded reasons for rejecting the request for police custody for Republic TV chief Arnab Goswami on Wednesday. The court remanded him in judicial custody for 14 days.

If the Yogi Adityanath-led Uttar Pradesh government brings a “limited scope legislation” restricting marriages between a Hindu and a Muslim in the garb of curbing “love jihad”, it would not stand in law, says Justice (Retired) Aditya Nath Mittal, Chairperson of the State Law Commission.

Actor Vijay has distanced himself from ‘All-India Thalabathy Vijay Makkal Iyakkam’ — a political outfit reportedly registered by his father S.A. Chandrasekhar, as reported in the media on Thursday.

A terrific end-overs heist from Ishan Kishan (55 n.o., 30b, 4×4, 3×6) and Hardik Pandya (37 n.o., 14b, 5×6), followed by a Trent Boult-Jasprit Bumrah bowling masterclass, put Mumbai Indians in the IPL final with a resounding 57-run win over Delhi Capitals at the Dubai International Stadium.

11/06/2020 India Comments Off on Morning Digest: Trump, without evidence, says 'if you count the legal votes I easily win'; farmers block roads in 18 States to protest agri laws, and more
TV & Movies