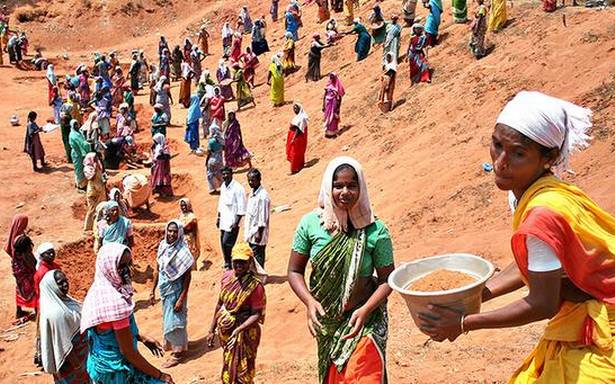 The Centre has decided to scrap the system of caste-based wage payments in the Mahatma Gandhi National Rural Employment Guarantee Act (MGNREGA) scheme after complaints from State Governments.

In an order dated November 1, the Finance Ministry directed the Ministry of Rural Development (MoRD) to “revert to the previous system of generating single muster, single FTO [or Fund Transfer Order] and transferring money into a single NeFMS [or National Electronic Fund Management System] account”.

CoP26 summit | Leaders pledge to cut methane and save forests

Leaders at the CoP26 global climate conference in Glasgow have pledged to stop deforestation by the end of the decade and slash emissions of the potent greenhouse gas methane to help slow climate change.

The inability of major powers so far to agree more broadly on rapid reductions in the use of fossil fuels, the main cause of man made global warming, has upset the poorer, smaller countries likely to suffer its worst effects.

Byelection results on Tuesday threw up a mixed bag for the BJP and the Congress, with the BJP losing all four Himachal Pradesh seats to the Congress, but securing its victory in Assam with the help of defectors from the Congress.

In the northeast, the BJP and its regional allies swept the nine Assembly seats across three northeastern States where byelections were held on October 30.

India has not only exceeded the Paris commitments but has now also set an ambitious agenda for the next 50 years, Prime Minister Narendra Modi said on Tuesday after he took part in two days of intense discussions with world leaders at the climate summit on the future of the planet.

The National Coalition on the Education Emergency in a report released online on Tuesday, cited data from the recent SCHOOL survey conducted in 15 States, which showed that 72% of elementary age children did not do any regular studying by any method during the lockdown, with only 8% of rural children able to access online classes.

Xie Zhenhua, a special climate envoy for China, spoke to reporters at the U.N. climate summit in Glasgow, Scotland and said that China is at a “special development stage” that warrants its current status as the world’s biggest emitter of climate-damaging fossil fuel pollution.

Facebook said it will shut down its face-recognition system and delete the faceprints of more than 1 billion people.

“This change will represent one of the largest shifts in facial recognition usage in the technology’s history,” said a blog post Tuesday from Jerome Pesenti, vice president of artificial intelligence for Facebook’s new parent company, Meta. “Its removal will result in the deletion of more than a billion people’s individual facial recognition templates.”

At least 25 people were killed and more than 50 wounded in an attack on Afghanistan’s biggest military hospital on Tuesday which saw two heavy blasts followed up by gunmen assaulting the site in central Kabul, officials said.

The explosions took place at the entrance of the 400-bed Sardar Mohammad Daud Khan hospital and were followed immediately with an assault by a group of gunmen, Taliban spokesman Bilal Karimi said. Four of the attackers were killed by Taliban security forces and a fifth was captured, he said.

With more than 400 cases reported in the past two weeks across several provinces in a country that has been following a “zero COVID” strategy, the country’s authorities are deploying now familiar sweeping measures of multiple lockdowns, mass testing and quarantining tens of thousands of people in designated facilities.

India calls for hike in climate finance to $1trillion

India on Tuesday said that climate finance cannot continue at the levels decided in 2009, and emphasised that it should be at least $1 trillion to meet the goals of addressing climate change.

Speaking at the Ministerial meeting of Like-Minded Developing Countries (LMDC) at the 26th international climate conference under way in Glasgow, Union Environment Minister Bhupender Yadav also called upon the LMDC countries to work closely to protect their interests.

To streamline the functioning of asset reconstruction companies (ARCs), a Reserve Bank panel has come out with a host of suggestions including the creation of an online platform for the sale of stressed assets and allowing ARCs to act as resolution applicants during the IBC process.

Opener Mohammad Rizwan continued his scintillating form with a blistering 79 as a thoroughly professional Pakistan stormed into the semifinals of the T20 World Cup with a 45-run thrashing of Namibia in Abu Dhabi on Tuesday.

Kagiso Rabada (3 for 20) and Anrich Nortje (3 for 8) registered career-best T20I figures as South Africa humbled Bangladesh by six wickets in a Super 12 match in Abu Dhabi at the ICC T20 World Cup on Tuesday.

Chasing a paltry 85, South Africa stuttered before a 47-run stand between Temba Bavuma and Rassie van der Dussen guided the side home with 39 balls to spare.

While the burly Afghan batters would be itching to deploy the long handle against a bowling line-up that has only one wicket-taker so far, the Indian batters’ difficulty against the Kiwi spinners would make Rashid Khan and Co. buoyant heading into the game.