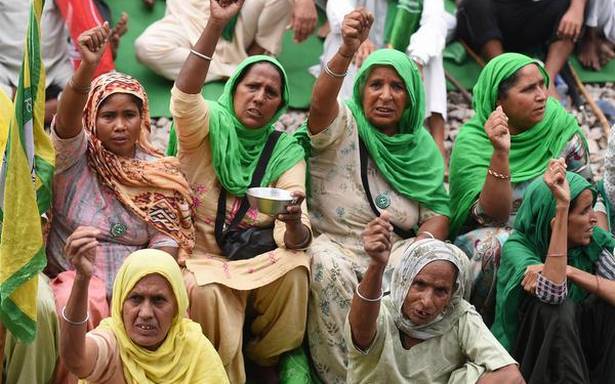 After its decision to repeal the three agri laws, the Centre is now facing pressure from agitating farmer unions and opposition parties to bring in a legislation guaranteeing Minimum Support Price, with ruling BJP MP Varun Gandhi also joining the chorus on Saturday saying the stir won’t end till this issue is resolved.

The new Rajasthan cabinet will see 12 new faces, including five from the Sachin Pilot camp, in the reshuffle slated on Sunday, sources said.

A day after the announcement on repealing the three contentious farm laws, Congress general secretary Priyanka Gandhi Vadra on Saturday stepped up the attack on the Narendra Modi Government, asking the Prime Minister to sack Minister of State for Home Affairs Ajay Mishra ‘Teni’. Mr. Mishra’s son Ashish is an accused in the Lakhimpur Kheri incident where protesting farmers were mowed down by vehicles of the Minister’s convoy.

Samyukt Kisan Morcha to go ahead with march to Parliament

The Samyukt Kisan Morcha on Saturday decided to go ahead with the pre-decided programmes of the farmers’ agitation till November 29. It includes the Lucknow mahapanchayat on November 22, observing the anniversary of the agitation on November 26 and the tractor march to the Parliament on the first day of the Winter Session.

With the series wrapped up 2-0, India can use the third T20I against New Zealand here on Sunday as an opportunity to test its bench strength. The likes of Avesh Khan, Ruturaj Gaikwad and Ishan Kishan will fancy their chances of getting a game. This could also give a much-needed break to the senior players, who surely must be reeling under the hectic schedule.

Assam to be lab for language-based education, says Pradhan

Education Minister Dharmendra Pradhan said he saw Assam as the laboratory of the country’s language-based education in the next decade. He was speaking at the North-East Education Conclave 2021 in Guwahati on Saturday.

Bengal-Sikkim rail link to be operational by Dec 2023: NFR

On November 17, Pakistan’s Parliament passed the International Court of Justice (Review and Reconsideration) Bill, 2021, granting the right of appeal to Kulbhushan Jadhav, former Indian Navy officer on death row on espionage and other charges. India expressed misgivings about the law, saying it still does not fulfil the terms laid down by the International Court of Justice (ICJ) in its July 2019 ruling which included the provision that India be allowed consular access to Jadhav.

The air quality of the city continued to remain in the “very poor” category on Saturday. It is likely to improve but will be in the same range till Monday. “Local surface winds also are low with moderate ventilation of near-surface pollutants. From 21st to 23rd, surface winds are likely to be strong resulting in effective dispersion that improves air quality,” Centre-run monitoring agency SAFAR (System of Air Quality and Weather Forecasting and Research) said in a statement.

A day after Prime Minister Narendra Modi announced the decision to repeal the contentious farm laws, Rashtriya Lok Dal (RLD) president Jayant Singh said it was the victory of the unity of farmers, and added that his party would stand by the decision of the Samyukta Kisan Morcha.

There is an uncanny resemblance in the governance styles of Prime Minister Narendra Modi and West Bengal Chief Minister Mamata Banerjee although they come from different parties and oppose each other, says Adhir Ranjan Chowdhury, leader of the Congress in the Lok Sabha. He says both Mr. Modi and Ms. Banerjee are interested in self-promotion and seek to extend the tenure of bureaucrats who have been subservient to the ruling party.

The Nihang Sikhs, also known as Sikh warriors, were among the proudest and the happiest lot at the Singhu border on Saturday, a day after PM Modi announced the scrapping of the three farm laws. This, despite the flak they said they received last month after a 33-year-old man was allegedly lynched by members of their sect at the protest site.

Case registered against Amazon in Bhind

Bhind district police in Madhya Pradesh have registered a case under the Narcotic Drugs and Psychotropic Substances Act, 1985 against Amazon.com Inc.’s local officials in connection with the alleged smuggling of marijuana through the e-commerce network.

Explained | Why is India’s coal usage under scrutiny?

On the final day of the UN Climate Change Conference held in Glasgow, India’s Minister for Environment Bhupender Yadav read out a statement promising to “phase down” rather than “phase out” the use of coal. This caused many to raise questions about India’s commitment to tackling climate change. Earlier, during the COP26 (Conference of Parties) summit, Prime Minister Narendra Modi had committed to turning India carbon neutral by 2070.

Highway to future | great expectations of new expressway to Bengaluru

There is considerable excitement among motorists that the new proposed expressway connecting Chennai with Bengaluru will reduce travel times and lead to a new corridor of development benefiting the three states it will pass through.

11/21/2021 India Comments Off on Morning digest | Samyukt Kisan Morcha to go ahead with march to Parliament, Rajasthan Cabinet reshuffle today, and more
India