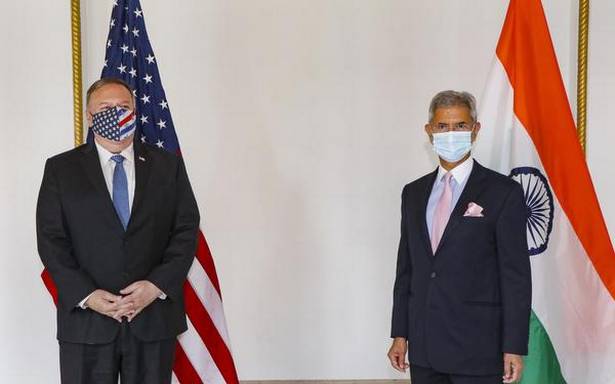 Directly criticising China for the coronavirus crisis as well as for its actions in the Indo-Pacific region, U.S. Secretary of State Mike Pompeo called for the Quadrilateral dialogue, or “Quad”, to “collaborate” in countering China.

The Union Health Ministry said on Tuesday that it was expecting COVID-19 vaccine supplies to be available from early next year.

Claycourt master Rafael Nadal passed his first real test of this year’s French Open with a 7-6(4) 6-4 6-1 victory against Italian rising star Jannik Sinner as his quest for a record-breaking 13th title gathered momentum on Tuesday.

Allowing pilgrims only through Pampa, limiting the number of pilgrims to 1,000 on weekdays and 2,000 on weekends, and making COVID-19-negative certificate mandatory are among the recommendations made by the high-level committee for the Mandala-Makaravilakku pilgrimage season at the Sabarimala Ayyappa temple that begins on November 16.

On the eve of Wednesday’s scheduled announcement of the AIADMK’s Chief Ministerial candidate for the 2021 Assembly election, there were indications that the incumbent CM and the ruling party’s co-coordinator, Edappadi K. Palaniswami, would be nominated for the top job.

President Donald Trump stirred controversy on Tuesday, his first full day as a COVID-19 outpatient, by pulling out of talks with Democrats on an economic aid package for the country and drawing rebukes from Facebook and Twitter for spreading misinformation about the coronavirus.

The Supreme Court will pronounce its judgment on Wednesday on balancing the right to protest against the right to public movement, in the background of the marathon Shaheen Bagh protests against the controversial Citizenship Amendment Act.

Law Minister Ravi Shankar Prasad said there is no stand-off between the Executive and the Judiciary over appointment of High Court judges and whenever a difference of opinion arises, it is mutually reconciled to ensure only a suitable person is appointed as a High Court judge.

A child has to learn his mother tongue to gain a foundation, says Supreme Court

A child has to learn his mother tongue to gain a foundation, the Supreme Court accosted Jagan Mohan Reddy-led Andhra government’s logic that children, without learning English, get ‘isolated’.

Eddie Van Halen, the guitar virtuoso whose blinding speed, control and innovation propelled his band Van Halen into one of hard rock’s biggest groups, fueled the unmistakable fiery solo in Michael Jackson’s hit “Beat It” and became elevated to the status of rock god, has died. He was 65.

The global economy is looking ‘less dire’ than it did in June and the International Monetary Fund will make a ‘small’ upward revision to its 2020 global output forecast, IMF Managing Director Kristalina Georgieva said on Tuesday.

In addition to having a battery of reliable all-rounders, one of the features of Mumbai Indians’ consistent success in the Indian Premier League over the years has been its all-round performance on the field. This was on full display at the Sheikh Zayed Stadium in Abu Dhabi on Tuesday, as a well-oiled MI machine reversed its adverse recent head-to-head record against Rajasthan Royals with a stylish 57-run win.