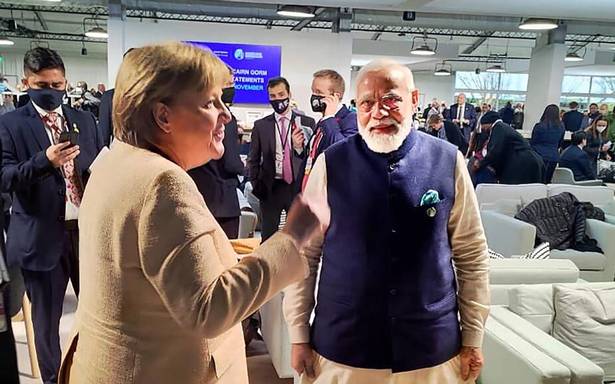 Until Monday, India was the only major emitter that hadn’t committed to a timeline to achieve net zero, or a year by which it would ensure its net carbon dioxide emissions would be zero.

Former Home Minister of Maharashtra Anil Deshmukh was arrested by the Enforcement Directorate (ED) on charges of corruption and money laundering.

On Monday, Mr. Deshmukh appeared before ED and was questioned for 12 hours by the Central Agency.

Three Republican Senators have introduced an amendment to the National Defense Authorization Act FY2022 – an annual defence budget bill – to make it harder for the executive branch of the U.S. government to impose sanctions on members of the Quadrilateral Strategic Dialogue (Quad) for buying Russian arms.

Ambassador to the United Arab Emirates Pavan Kapoor has been appointed as the envoy to Russia, the Ministry of External Affairs announced on Monday, part of a major reshuffle of postings in the neighbourhood and other major capitals.

Mrinal Kutteri of Telangana, Tanmay Gupta of Delhi and Karthika G. Nair of Maharashtra have scored a perfect 720 marks in the NEET examination to jointly snag the All India number one ranking.

Prime Minister Narendra Modi and his British counterpart Boris Johnson on Monday discussed the evolving situation in Afghanistan on the sidelines of the COP26 summit in Glasgow. The Ministry of External Affairs (MEA), in a statement, said the two leaders discussed bilateral partnership in the context of climate change, Indo-Pacific strategy and post-COVID global economic recovery.

India’s gross GST revenues crossed the ₹1.3 lakh-crore mark in October, the second highest collection since the tax regime was implemented in July 2017.

The Finance Ministry said that October’s GST revenues reflect the recovery in economic activity and would have ‘still been higher if the sales of cars and other products had not been affected on account of disruption in supply of semi-conductors.’

Jos Buttler hit the first century of the ICC T20 World Cup 2021, his unbeaten 101 steering England to 163 for four against Sri Lanka on Monday.

In reply, the Sri Lankans blew hot and cold before getting dismissed for 137 in 19 overs. Bhanuka Rajapaksa (26), Dasun Shanaka (26) and Wanindu Hasaranga (34) tried their best but in vain. For England, Moeen Ali, Adil Rashid and Chris Jordan took two wickets apiece.

Tottenham fired manager Nuno Espírito Santo on Monday after losing half of his 10 Premier League matches in charge of the club.

The dismissal, after only four months in the job, followed a 3-0 home loss to Manchester United on Saturday when Nuno was booed and fans chanted “You don’t know what you’re doing” at the Portuguese coach.

Pakistan’s hat-trick of wins in the ongoing ICC T20 World Cup means it is close to sealing its spot in the semifinals when it takes on Namibia on Tuesday.

Babar Azam’s men began by ending their India hoodoo at World Cups with a record 10-wicket win in Dubai. It has set the tone for a tournament where Pakistan’s uncharacteristic consistency and enviable chutzpah have become the hallmarks.