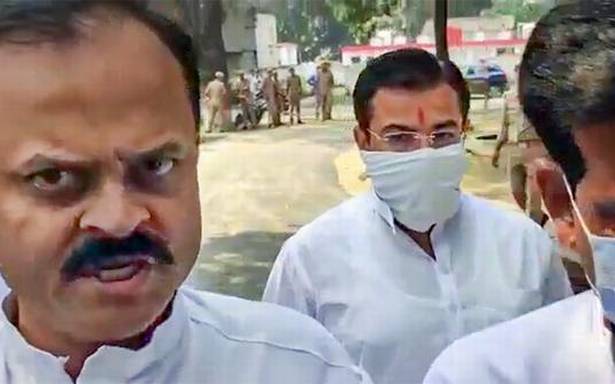 Union Minister Ajay Mishra’s son Ashish Mishra on Saturday appeared before the special investigation team (SIT) formed in connection with the Lakhimpur Kheri violence case. Police officials here at the spot refused to comment on the ongoing interrogation. Ashish Mishra was supposed to appear before police on Friday, but he did not do so.

The 13th round of Corps Commander talks are scheduled to start at 10.30 a.m. at the Moldo border point on the Chinese side of the Line of Actual Control (LAC) in eastern Ladakh.

The transfer was one among the 13 transfers and appointments of Chief Justices to various High Courts. They are part of a major reshuffle orchestrated by the Supreme Court Collegium led by Chief Justice N.V. Ramana. September had seen over 100 recommendations for appointments, transfers and re-transfers in various High Courts sent from the Collegium to the Government for approval.

Jaishankar to visit Kyrgyzstan, Kazakhstan and Armenia from Sunday

External Affairs Minister S Jaishankar will pay a four-day visit to Kyrgyzstan, Kazakhstan and Armenia beginning Sunday with an aim to further expand bilateral ties and discuss key regional issues including the developments in Afghanistan.

Nearly a month late, new parliamentary panels are out

After a delay of nearly a month, Parliamentary Standing Committees were notified on Saturday. Former Deputy Chief Minister of Bihar Sushil Modi, who was widely expected to join Prime Minister Narendra Modi Cabinet, is now the Chairman of the Standing Committee on Law and Justice.Notwithstanding a raft of complaints against him from the BJP leaders, Congress MP Shashi Tharoor survived as the Chairperson Of The Standing Committee of Information and Technology.

Senior Taliban officials and U.S. representatives to meet on Saturday and Sunday in Doha

The Taliban on Saturday ruled out cooperation with the U.S. to contain extremist groups in Afghanistan, staking out an uncompromising position on a key issue ahead of the first direct talks between the former foes since America withdrew from the country in August.

A sense of unease grips Pandit colonies in Kashmir Valley

Unease is palpable in the gated Sheikhpora Migrant Colony, home to around 75 migrant Pandits, in central Kashmir’s Budgam on Saturday. However, many Pandits have resolved not to migrate again, like the 1990s, in the face of fresh targeted killings by the militants earlier this week.

Maharashtra Minister Nawab Malik alleged that the NCB had detained Rishabh Sachdeva, the brother-in-law of former Mumbai BJP youth wing president Mohit Kumbhoj aka Mohit Bhartiya, and two others, but let them off later

Pant’s side needs to lift its fielding standards and better utilise Ashwin; Dhoni’s unit will want to get its bowling right and hope its in-form openers set the tone.

There can be no Opposition without Congress being at centre of it: Gujarat MLA Jignesh Mevani

Independent legislator from Gujarat Jignesh Mevani speaks on his reasons for joining the Congress, the Opposition make-up for the 2024 general election and the political situation in Gujarat.

Prime Minister Andrej Babis’ centrist party on Saturday narrowly lost the Czech Republic’s parliamentary election, a surprise development that could mean the end of the populist billionaire’s reign in power.

Six-time winner Lionel Messi and Cristiano Ronaldo, a five-time victor, were among the 30 names revealed on Friday for the Ballon d’Or award.

China’s President Xi Jinping on Saturday said “national reunification by peaceful means” with Taiwan “will and can be realised”, speaking amid what Taiwan officials have called the worst tensions in four decades.