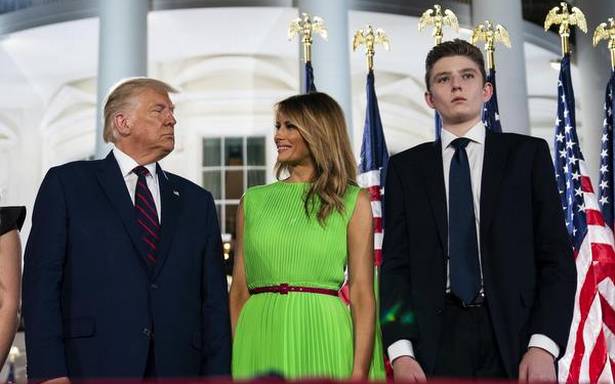 President Donald Trump’s 14-year-old son Barron tested positive for COVID-19 but exhibited no symptoms, after both of his parents contracted the virus, First Lady Melania Trump said on October 14.

As many as 16 people lost their lives due to the rains pounding Hyderabad on Wednesday. With the latest deaths, the toll till Wednesday night rose to 24 including eight members of two families, who lost their lives after a large boundary wall collapsed on their houses in Chandrayangutta area late on Tuesday.

Russian authorities have given regulatory approval to a second coronavirus vaccine after early-stage studies, two months after a similar move prompted widespread criticism from scientists both at home and abroad.

National Conference (NC) president Farooq Abdullah and vice-president Omar Abdullah on Wednesday met Peoples Democratic Party (PDP) president Mehbooba Mufti, released after 14 months on Tuesday, at her residence and extended an invitation to hold a meeting of all the signatories of the Gupkar Declaration, a pact to fight for the restoration of J&K’s special status.

Bihar Chief Minister Nitish Kumar may have been reiterating in his virtual and actual poll campaign meetings that rule of law has been established in the State in the last 15 years of the National Democratic Alliance (NDA) regime, but come election time and Bihar appears as it was in 1990s — when bahubalis (strongmen) made headlines. In this Assembly poll, too, almost all the parties have fielded similarly fearsome “dons”, or their wives, to add extra numbers to their final winning tally.

The Central Bureau of Investigation (CBI) team probing the gangrape and murder of a Dalit girl in Boolgarhi, Hathras, summoned her two brothers and father to its camp office on Wednesday and questioned them for around seven hours.

Passengers travelling on trains without masks or not following social distancing in railway premises may now need to pay fine or even face jail terms as per new guidelines that seek to protect the spread of COVID-19 during the upcoming festive season.

Assam’s district heads have been asked to submit the list of ineligible people whose names have been included in the National Register of Citizens (NRC) published in August 2019. They have also been told to write speaking orders for deletion of such names from the list of citizens.

The Union Cabinet has approved a project partially funded by the World Bank to carry out a reform agenda in the governance of school education, and improve data and assessment systems at the national level, as well as teaching and learning outcomes in six States, especially for early childhood and vocational education.

China on Wednesday marked the 40th anniversary of the establishment of its first special economic zone (SEZ) in Shenzhen, outlining plans to boost its innovation capabilities and global technological influence, even as it grapples with a bruising trade and technology war with the U.S.

U.S. Secretary of State Mike Pompeo announced the concurrent designation of Assistant Secretary Robert A. Destro of the Bureau of Democracy, Human Rights, and Labor to serve as the country’s Coordinator for Tibetan Issues.

On a night when some quality, express pace lit up the Dubai International Stadium, Delhi Capitals emerged victorious against Rajasthan Royals. That perhaps wasn’t surprising, as DC boasts the fastest, deadliest pair of pacers in the IPL.