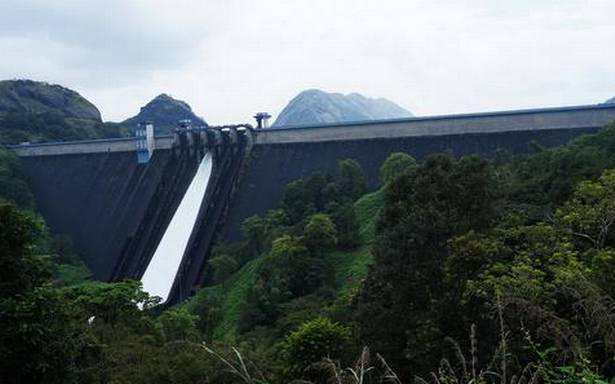 Increased discharge into Periyar from Mullaperiyar

More water was released from the Idukki dam on Saturday following heavy rainfall from Friday night.

Shutter 3 of the Cheruthoni dam that was raised by 40 cm on Thursday was further raised to 80 cm to release around 80 cumecs of water at 10 a.m. on Saturday. (Since the Idukki arch dam has no shutters, the water in the reservoir is released through the Cheruthoni dam shuttters.) The water level reached 2,399.98 ft at 10 a.m. The upper rule level is 2,400.03 ft. However, even after the increased release of water, the water level in the Idukki reservoir rose to 2,400 ft by 3 p.m.

The Idukki Collector said the decision to further raise the dam shutter was taken considering the chances of water going above the upper rule level. She called on the people living close to the Periyar to take all precautionary measures.

The catchment area of the Idukki reservoir received 26.4 mm of rainfall on Saturday. The power generation at the Moolamattom power house was at the maximum level of 17.538 million units on Friday.

Meanwhile, two spillway shutters of the Mullaperiyar dam were raised by 30 cm each at 6 a.m. on Saturday. The release of more water into the Periyar resulted in heavy inflow into the Idukki reservoir.

The Mullaperiyar shutters were opened in the wake of the water level crossing the upper rule level of 141 ft. It was 141.10 ft at 10 a.m. Tamil Nadu was keeping one of the shutters open at 10 cm after closing four shutters on Friday. The Supreme Court-approved rule curve in Mullaperiyar till November 20 was 141 ft.

The tunnel discharge was 2,300 cusecs while the water discharge through the spillway shutters was 77.67 cusecs.