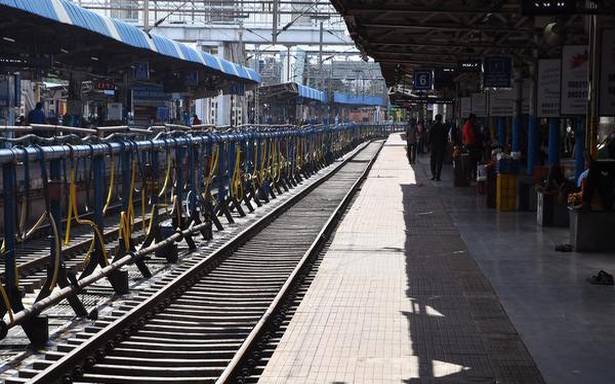 The South Central Railway (SCR) and the Andhra Pradesh State Road Transport Corporation (APSRTC) have cancelled many bus and train services to Tamil Nadu in view of the damage done to the railway tracks and several breaches developed on the National Highway during the recent rains.

More trains bound to Nellore, Tirupati and Chennai were cancelled on Monday. Railway tracks the Nellore-Padugupadu section have been damaged. The officials were camping at Padugupadu and taking measures to repair the tracks.

The platforms at the Vijayawada railway station wore a deserted look on Monday, while passengers were seen enquiring at the helpdesk about the resumption of services. Some passengers cancelled their journeys in the wake of cancellation of trains towards Chennai.

The APSRTC has partially cancelled services to Chennai due to damage of bridges on the national highway. Many bus services from Visakhapatnam, Vijayawada, Ongole and other depots have been suspended, the RTC officials said.

APSRTC Managing Director Ch. Dwaraka Tirumala Rao said that instructions had been issued to the officials to take all safety precautions while operating services in the rain-hit districts.

“Road link has been cut off near Gudur and other places due to floods. We are running buses to Chennai depending on the need. Senior officers are monitoring the situation,” said APSRTC Executive Director (Operations) K.S. Brahmananda Reddy.

Many software professionals, traders and students, who returned to Andhra Pradesh in the week-end got struck in their native towns as the train and bus services were cancelled.

“I came to my native place Gudivada to for a week. But, the heavy rains and flash floods damaged the bridges, roads and tracks, forcing me to stay back. I am planning to return to my workplace by flight,” said Francis, an advocate.

“On seeing the floods, damage of roads and the tragic scenes in television, my family members advised me to cancel my journey. As there are no bus and trains to Chennai, I got struck here,” said V. Pavan, a student from Tadepalli.

11/22/2021 India Comments Off on More buses, trains to Chennai cancelled due to flood
India