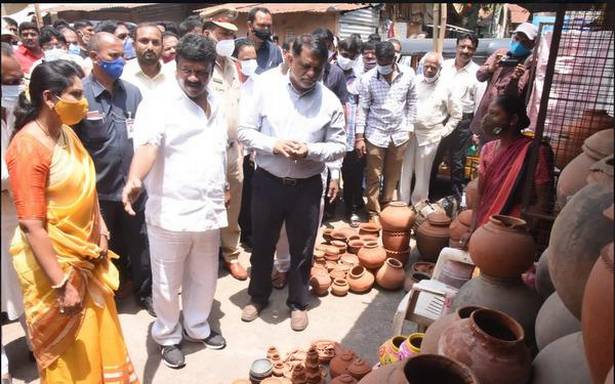 The popular Monda Market in Sanathnagar Assembly constituency would be developed on the lines of the recently remodelled Mozamjahi Market, Minister for Animal Husbandry, Fisheries and Dairy Development Talasani Srinivas Yadav stated on Thursday during a visit to the market. He, however, ruled out shifting of the market.

The Minister along with Special Chief Secretary (Municipal Administration) Arvind Kumar, local Corporator Deepia, General Manager (HMWSSB) Ramana Reddy and Assistant City Planner Mahender and others went round the vegetable, mutton, fish and pot markets within Monda Market extensively. He discussed the steps to be taken for developing the market having long history and popularity. Mr. Srinivas Yadav explained that the market was established during the Nizam era to help communities carry out petty and small businesses as their livelihood. He stressed the need to develop necessary amenities both for the vendors/traders and visitors (people) and asked the officials concerned to prepare a comprehensive report for the purpose. A consultancy was already appointed for the purpose and was told to submit its report in 15 days, he noted.

A meeting would be convened with the vendors/traders after getting the report from the consultancy, the minister said, adding that steps were also being taken to construct a multi-level parking facility in the space behind old ‘jailkhana’. The minister also directed the Chief City Planner to take up road-widening from Palika Bazaar Chowrasta to vegetable market in Monda Market and also to remove the godown of old Gandhi Hospital in the area.