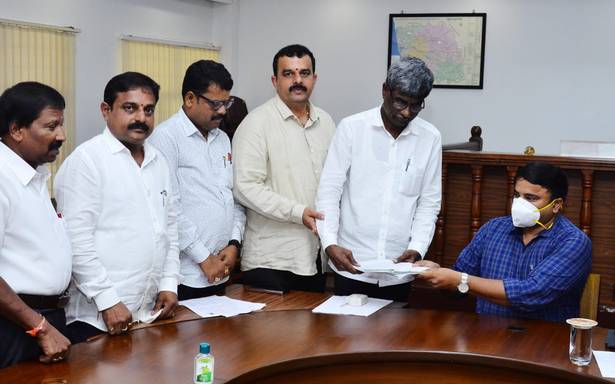 Minister for Social Welfare and Backward Classes Welfare Kota Srinivas Poojary submitted his nomination papers for the December 10 elections to the Karnataka Legislative Council as the BJP candidate from the local authorities’ constituency of Dakshina Kannada and Udupi, in Mangaluru on November 20. Elections will be held for two seats in the constituency.

Mr. Poojary hails from Kota in Udupi district. He is contesting from the constituency for the fourth time. He was first elected as an MLC in a by-election in 2008 following the death of the incumbent and Congress leader Blasius M. D’Souza. In 2010, he was elected unopposed. He was elected for the third time in the elections held on December 27, 2015, along with Pratapchandra Shetty of the Congress.

He had served earlier as Minister for Fisheries, Ports and Inland Transport, and Muzrai. He had served as Leader of Opposition in the Legislative Council.

Meanwhile, South Canara District Central Cooperative (SCDCC) Bank Chairman M. N. Rajendra Kumar announced on November 20 that he will not contest the elections. The announcement comes a day after Cooperation Minister S. T. Somashekar said that the government can dismiss him for alleged misuse of funds.

While addressing the Jan Swaraj Yatra organised by the BJP in Mangaluru and Udupi, Mr. Somashekar said that ₹19 lakh was being transferred every month from the SCDCC Bank to Navodaya Grama Vikasa Charitable Trust of which Mr. Kumar is the managing trustee.

Earlier, Mr. Kumar had announced that he would contest as an independent candidate from the local authorities’ constituency of Dakshina Kannada and Udupi. He had opened a campaign office in Mangaluru on November 16 and met Karnataka Pradesh Congres Committee president D. K. Shivakumar in Bengaluru on November 17.

On November 20, he told mediapersons that he will not contest as he does not want to politicise the cooperative sector.