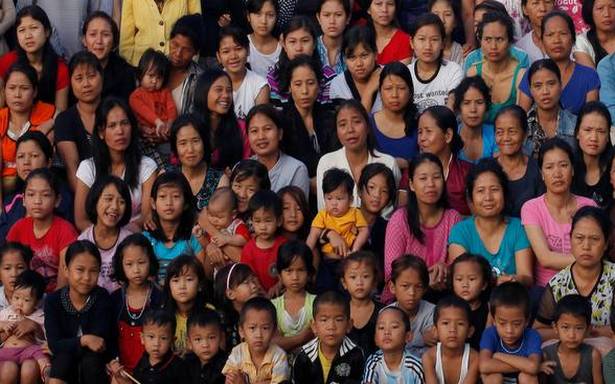 The announcement has come three years after an influential Mizo organisation called for a ‘baby boom’ in the State.

Three years after the Young Mizo Association (YMA), an influential organisation, asked the tribal people to have more babies, a Minister in Mizoram has announced a cash prize of ₹1 lakh to a parent in his Assembly constituency with most children. Sports, Youth Affairs and Tourism Minister Robert Romawia Royte made the announcement on June 20 for encouraging the demographically small Mizos to reverse the declining population growth rate.

He represents the Mizo National Front from the Aizawl East-II constituency.

Mr. Royte did not quantify the children a man or woman should have to be eligible for the award.

“I made the announcement on Father’s Day. The prize money will be sponsored by the North East Consultancy Services,” he told journalists. His family runs the agency.

The Minister said Mizoram’s population density of 52 persons per sq. km was much below the national average of 382. “The infertility rate and the declining growth rate of the Mizo population has been a serious concern for many years,” he said.

His announcement came a week after the death of Zion-a Chana, the leader of a polygamous Christian cult who had 39 wives and 94 children besides several grandchildren.

The award scheme was in sharp contrast to the Assam government implementing the two-child policy for government jobs and said similar norms would gradually be applied for government schemes.

Mr. Royte is not the first leader of indigenous groups in the Northeast to declare or give a cash award to couples or women with the most children. The fear of being outnumbered by “outsiders” and migrants is believed to have been at work.

Meghalaya’s Khasi Hills Autonomous District Council had in January 2017 given ₹16,000 to Amelia Sohtun for giving birth to 17 children while Dorothia Kharbani and Philomena Sohlangpiaw were given ₹15,000 for bearing 15 children each. The reward, the council said, was an encouragement for others to have more children.

Almost a decade later, NGOs in Manipur began organising contests for mothers with most children. One such group, the Iramdam Kunba Apunba Lup, awarded 13 women with 10-15 children in July 2016.

In June 2018, YMA president Vanlalruata said Mizoram needed a “baby boom” to ensure that Mizos filled the space taken up by “thousands of migrant workers and labourers”.

Women’s rights activists said the baby boom idea was a very patriarchal view of reproduction. “This is an attempt to deny women their rights over their womb,” an activist in Mizoram, declining to be quoted, said.

The Population Foundation of India, an NGO, has been advocating that India should follow China’s two-child policy that would further empower women and enhance their capabilities to work better than coercive population policies.

In December 2020, the Union Ministry of Health and Family Welfare told the Supreme Court that the family welfare programme in India was voluntary in nature.

India was a signatory to the Programme Of Action of the International Conference on Population and Development, 1994, which was unequivocally against coercion in family planning.