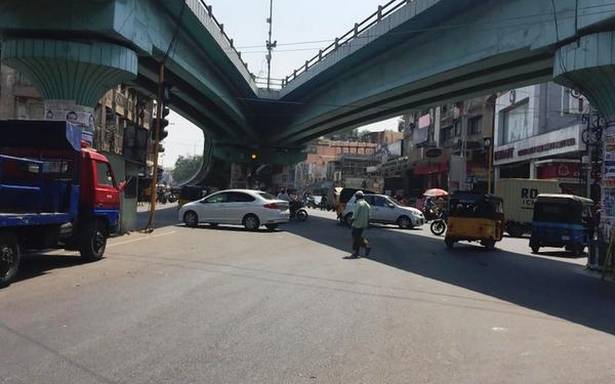 Besides easing congestion, it has enabled greater surveillance of goods-laden vehicles coming from Paper Mills Road

With a minor change, traffic congestion below the mini-flyover at Doveton junction in Vepery has eased.

It used to be an accident-prone section, and with this tweak, pedestrians are able to cross this junction safely. Besides, it has made for better surveillance of vehicles coming from Paper Mills Road.

As per the new arrangement, motorists, especially those coming from Paper Mills Road, cannot proceed straight towards Ritherdon Road to reach Poonamallee High Road. They have to take a left turn at Doveton junction to reach PH Road via Vepery Main Road and EVK Sampath Road.

There are no changes for other motorists negotiating Doveton junction; their movement is as per the previous traffic plan.

According to police sources, the new arrangement helps check overloaded vehicles, including mini-vans on Paper Mills Road, as they now have to go past the city police headquarters where a large team of police personnel are stationed round-the-clock.

The new change should be viewed in the light of the closure of the dilapidated Elephant Gate bridge last year, as the closure of the old bridge has led many motorists to take alternative routes including Doveton junction to reach the rest of the city.

For shoppers, the new change at Doveton junction has relief as they can cross the congested junction safely.

Shoppers throng the busy junction including Tana Street during evening hours as the area abounds in garments shops where clothes are sold at competitive prices.

Earlier, the junction had gained notoriety for accidents including fatal ones even after the construction of the mini-flyover, which was built nearly two decades ago across the junction.

The junction remained accident-prone for many years mainly due to an increase in flow of vehicles especially those coming from Paper Mills Road.

Besides, despite the increase in the volume of vehicles, the Doveton junction was narrow with little scope for widening.

Motorists and pedestrians believe a permanent police booth should be established at the junction to prevent any traffic violations especially those involving motorists coming from Paper Mills Road and proceeding straight towards Ritherdon Road.

At present, traffic police personnel were present mainly during rush hour. Such police booth will act as a deterrent to such traffic violations.

“Steps will be taken to set up a police booth at the junction soon,” say police sources.