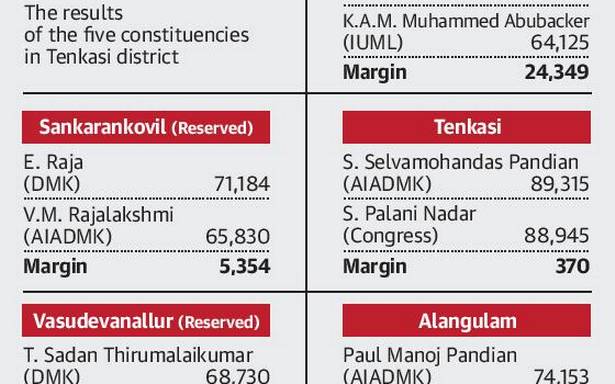 The ruling party, which had three MLAs in Tenkasi district including two reserved segments of Vasudevanallur and Sankarankovil, has lost both reserved seats in the newly formed district to DMK.

The most interesting poll outcome from the district is the victory of a novice, E. Raja of DMK, in Sankarankovil (Reserved) constituency. He defeated Minister for Adi Dravida Welfare V.M. Rajalakshmi by a margin of 5,354 votes. With this victory, DMK wrested Sankarankovil, an AIADMK bastion, after 32 years.

Sitting MLA of Kadayanallur K.A.M. Muhammed Abubacker of Indian Union Muslim League lost his seat to AIADMK candidate C. Krishna Murali, son of former minister Chendurpandian, who was elected from the seat in 2011.

Though this segment has a sizable number of Muslim voters and Mr. Krishna Murali could not canvas votes in a few places due to AIADMK’s electoral alliance with the BJP, he managed to register the win in this backward segment.

In Alangulam, sitting MLA and former Minister Poongothai Aladi Aruna of DMK lost to AIADMK’s Paul Manoj Pandian by a margin of 3,539 votes.

Besides failing to enjoy the wholehearted support of party office-bearers of this constituency as party’s Tenkasi south district secretary Sivapadmanathan was eying for this segment, Dr. Poogothai’s poll prospects were marred by Panankaattuppadai Katchi candidate Hari Nadar, who polled 37,727 votes.

Congress candidate S. Palani Nadar, who lost the 2016 Assembly polls to AIADMK’s S. Selvamohandas Pandian by a thin margin of 462 votes, has avenged for his defeat this time with the winning margin of 370 votes.