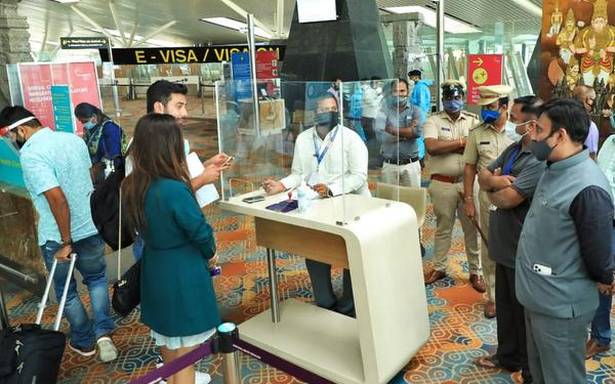 After a temporary ban on travel from the U.K., flight operations have resumed since Saturday and Kempegowda International Airport Ltd. (KIAL) is all set to receive the first set of passengers on Sunday morning.

Health and Medical Education Minister K. Sudhakar, who visited KIAL and reviewed the arrangements for screening of the returning passengers, said the airport authorities had informed him that all flights are coming in full capacity with 300-350 passengers in each flight.

Returnees from other countries (other than U.K.) will have to get a negative report atleast 72 hours before boarding the flight from that country. Otherwise, they will be subjected to the test at airport.

The Minister said the airport authorities had made arrangements for the passengers to stay at the airport till the RT-PCR reports are out. Asked if the government will allow passengers to get the express test done – wherein the reports will arrive in 15-20 minutes, he said: “There is a proposal in this regard by a pharma company, but we are yet to take a call on that.”

“The Centre’s Standard Operating Procedures (SOPs) will have to followed strictly. The airport authorities have been cooperating with us,” he said.

Meanwhile, Health Commissioner Pankaj Kumar Pandey issued a circular on Saturday directing all officials concerned to follow the SOPs and guidelines for preventing the spread of the U.K. variant in Karnataka. He also circulated protocol prepared in accordance with the guidelines laid down by Union Health and Civil Aviation Ministries to be followed by the airline crew flying on domestic and international flights.