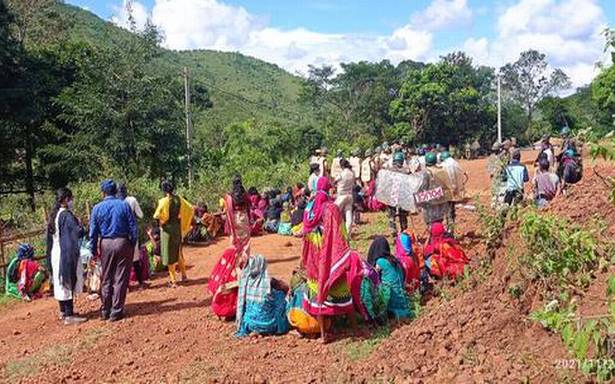 Venue was cordoned off and only those people who supported the project were allowed to attend, they say

A public hearing on Monday on grant of environmental clearance for a bauxite mining project in Odisha’s Koraput district evoked sharp reactions from activists who alleged that many people who would be affected were barred from airing their views.

The State Pollution Control Board organised the hearing on the clearance to the Hindalco Industries Limited for the Maliparbat bauxite mine at Kankaramba under Pottangi block of Koraput.

The hearing process could not be completed due to local resistance on September 22. The mining lease area is spread over 268.110 ha of Aligaon, Kankaramba and Sorishpadar village under Pottangi tehsil.

Ahead of the hearing, the Koraput district administration had deployed 30 platoons of police and several officials with magisterial powers keeping in view the law and order issue.

Villagers alleged that the venue was cordoned off and only those people who supported the project were allowed. The hearing was hurriedly would up within one hour without providing people opposed to the project an opportunity, they charged.

“The mining lease was granted to the Hindalco Industries in 2003. Environmental clearance was accorded to it despite the fact the majority of the affected people had spoken against the project. Subsequently, the clearance and the lease period ended in 2013 while the industry could not undertake any real mining activities due to local resistance,” said Prafulla Samantra, winner of the Goldman Environmental Prize.

“Now, the industry has got a fresh lease for 50 years for which the hearing is being held. People in 18 villages surrounding the Maliparbat are dependent on agriculture and are opposed to the project since 2003,” Mr. Samantra said.

He pointed out that though 36 perennial streams flow down from the Maliparbat, which is the source of water for villagers for their agricultural and drinking purposes, the mining was thrust on them. Niranjan Kilo, a resident of Maliguda, said, “Villagers wanted to participate in the hearing and communicate their views. However, the police took women in their vans to unknown places and obstructed them from attending the meet.”

Similar views were expressed by Abhisada Peli of Kankaramba village. “Agriculture has been our main source of livelihood. If mining is allowed, most people will be affected. The mining industry cannot provide employment to all villagers,” he said.

A group of social activists, who had recently visited the villages where people were resisting the project, said people had been arrested in connection with their opposition to the September 22 hearing and many of them were in jail. “The court would hear their bail application on November 24. The hearing was held in the absence of the people opposing the project,” they said.

“The administration had taken preventive measures keeping the September 22 violence in mind. Some people had resorted to violence and launched a murderous attack on company executives and government officials on that day. The police cordoned off the venue and made sure that people entered the venue without arms,” said Mr. Akhtar.

Prior to the hearing, the police notice to individuals had raised eyebrows. In one of the notices issued under Section 149 of CrPC by Semiliguda police station to Naba Majhi of Pakajhola village, the police had cautioned him not to indulge in rioting activities. Activists said the police had acted at the behest of the company and terrorised people.

11/23/2021 India Comments Off on Mining plant: We were not allowed to air views at public hearing, villagers allege
India