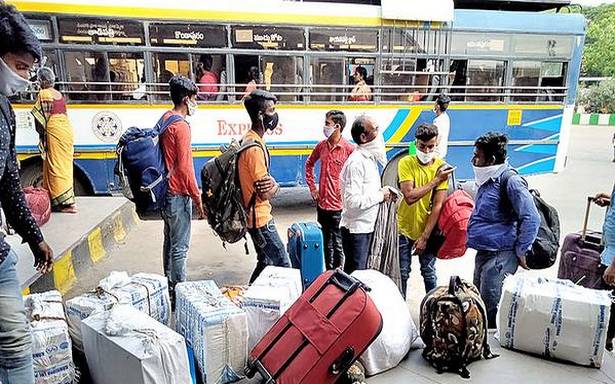 Anticipating a lockdown, they head to bus and railway stations

Migrant workers employed in various sectors in Anantapur district began the long journey back to their native places on Wednesday, with hundreds of them reaching bus and railway stations across the district.

Around 50 workers hailing from Raichur in Karnataka employed in the railway line doubling and electrification works at Parsannayapalli on the outskirts of Anantapur left their temporary accommodation at Vidyut Nagar and went to the RTC bus station to take a bus to Mantralayam in Kurnool district so that they could cross the border and take some other available transport to Raichur.

Manjunath, a migrant worker hailing from Raichur, told The Hindu that they anticipated a lockdown in Andhra Pradesh too as COVID19 positive cases were rising steeply and Karnataka had imposed a 14-day restriction from Wednesday.

“If we stay here and a lockdown is imposed, we will be in the same situation like last year. We wish to return to our native places as early as possible,” said Manjunath, who was carrying a large suitcase and a backpack.

A group of 18 workers was on the move early in the morning, while the others were preparing to leave Anantapur at the earliest, he added.

The APSRTC stopped bus services to all destinations in Karnataka on Tuesday night and the workers anticipate that services within the State too stop soon.

At the bus station in Anantapur, 20 workers alighted from a bus that arrived from Tadipatri.

They were all headed to the railway station to take a train to Kolkata. These workers said that during the week, many had left for Kolkata and others too were planning to leave soon.

The workers from West Bengal, who only knew a smattering of Telugu, are employed by corporate firms that grow fruits and other horticulture crops. The ‘Happy Banana’ and ‘Ini Farms’ have banana processing and packaging units in Tadipatri and Putluru mandals of the district.

Meanwhile, in Tumukunta near Hindupur, the largest industrial area of the district, none of the workers are leaving as the companies are taking care of their staff they returned by getting assurances from their employers.