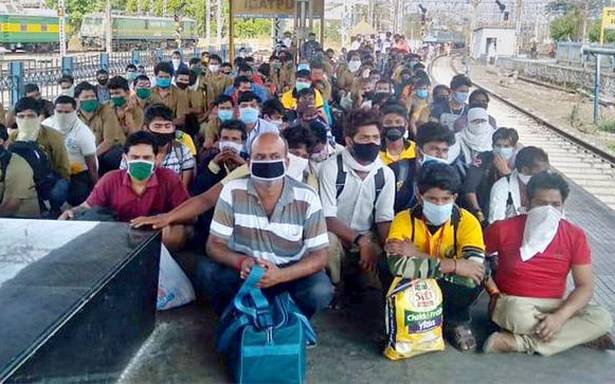 Workers boarded train thinking it was for Gorakhpur; it was to halt at Bhusaval yard

Nearly 51 migrant labourers were sent back from Igatpuri to Mumbai after they thought a train standing at the station was bound for Gorakhpur, Uttar Pradesh.

The labourers had reached Igatpuri on trucks and were in the vicinity of the station, when the train arrived on Sunday. Central Railway (CR) was running an empty rake from Mumbai and had contract workers of various railway departments on board the train.

According to sources, the rake’s eventual destination was Gorakhpur, which is its originating point, but it was to be stationed in Bhusaval yard before being sent to Gorakhpur.

“Since all trains were stopped, we were facing an issue of space at our yards in Mumbai. This rake originates from Gorakhpur and hence it was decided to run it empty till there with a halt at Bhusaval. Since we also had move a few workers to Bhusaval as well as a few who belong to Gorakhpur, they were on board the train,” a senior railway official said on condition of anonymity.

The issue cropped up at Igatpuri, where the train halted around 9 a.m. Other migrant workers stranded near the station entered, which was noticed by railway employees. Sources said since these workers had come from Mumbai and the railway authorities were not comfortable with evicting them, it was decided to return the rake to the city.

The rake left for Mumbai around 2 p.m. and reached Dadar station at 6 p.m. where the migrant labourers were handed over to the district administration. Arti Singh, Superintendent of Police, Nashik (Rural), said the local administration had not been informed by the railway authorities regarding the movement of the rake and only learnt about the development after local railway authorities informed them.

“Passenger train movement is shut till April 14. People are requested not to believe in rumours about such trains being run. We are running freight trains to supply essential commodities to various parts of India,” said chief public relations officer, CR, Shivaji Sutar.

Related posts:
03/29/2020 India Comments Off on Migrant labourers sent back to Mumbai from Igatpuri
TV & Movies