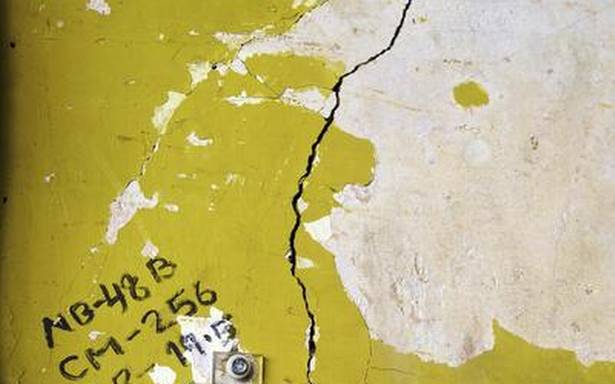 They claim that many houses have developed cracks; BMRCL says vibrations well within international standards

Mohammed Nizamuddin and his family have been living away from their home in the bustling Dhanakoti Lane, near Thimmaiah Road in Shivajinagar, for the past several days. They are among the several families who have been asked to move away from their homes temporarily due to the disturbances caused by the ongoing tunnelling work by the Bangalore Metro Rail Corporation Ltd. (BMRCL).

Mehboob Khan, a resident, claimed that due to vibrations, many houses had developed cracks, and because of the sound they haven’t been able to sleep properly. “My five-member family is now living with my daughter, who lives on Thimmaiah Road,” he said and added that those who don’t have relatives have been put up in hotels.

On Saturday night, things came to a head when several residents rushed out of their homes and gathered on the street, demanding stoppage of the tunnelling work. Shivajinagar MLA Rizwan Arshad had to intervene and pacify the residents while also coordinating with the BMRCL engineers. “BMRCL is giving compensation of ₹1,500 for a family of four. While we are all for development, the only issue is the timing of the work,” he said and added that he would soon meet the managing director of BMRCL, the engineers and representatives of L&T, which is executing the work.

The residents, meanwhile, complained that though BMRCL officials took their details and assured them of releasing compensation, they were yet to receive anything.

Yashvant Chavan, BMRCL’s spokesperson, said the tunnelling work is being taken up in the underground section of the 21.25-km Gottigere-Nagawara line, with the tunnel boring machine coming to Shivajinagar from Pottery Town.

He stated that before the work was taken up, BMRCL had conducted a building condition survey. “The condition of all buildings coming within 40 metres of the outer edge of the tunnel has been assessed by our engineers, though the ‘influence zone’ is 15 metres from the outer edge of the tunnel,” he said and added that the vibrations and other parameters were well within the international standards.

“Safety is the first priority for BMRCL. In case of old buildings, our engineers have assessed the strength of the foundation and taken measures to safeguard the structure,” he added.