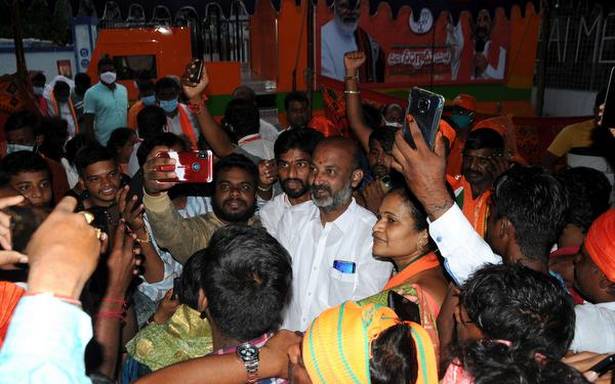 ‘Party will ensure equal employment opportunities for both Hindus and Muslims’

The BJP will bring Metro rail to Old City till Falaknuma and will ensure equal employment opportunities for both Hindus and Muslims, without any discrimination, once it comes to power in 2023 elections, said party president Bandi Sanjay Kumar on the second day of his ‘Praja Sangrama Yatra’ on Sunday.

He minced no words in charging the Majlis party with being solely responsible for Metro not running in Old City and halting the construction at MGBS, Imblibun. “The government should explain why there is lack of development in Old City,” he said.

“People of Telangana have already decided to support my party,” he said, and was confident of raising the saffron flag on Golconda Fort. “Once in power, the very first public meeting will be held at Bhagyalakshmi Temple at Charminar,” he added.

“BJP is not against any religion and the ‘Triple Talaq’ Act was brought forth for the benefit of Muslim women. Centre’s welfare schemes are for all and not just for the majority community,” he said. The BJP chief accused the TRS first family of “swindling funds from Centre”.

Mr. Sanjay Kumar, accompanied by scores of party leaders and followers, talked to people involved in petty businesses on roadsides throughout, seeking details about their livelihoods, incomes and difficulties. “Did you get the 2BHK house as promised by this government?” was his main query, as a loud ‘no’ was the answer. He told people about the ₹10,000 loan by the Centre for street vendors.

The party pulled no stops to make the programme a success with banners and flags adorning the route with artistes performing and songs played continuously as firecrackers were burst as he walked through Toli Chowki, Shaikpet, Golconda, Langer Houz and so on, for about 11 km, with night halt scheduled at Bapu Ghat. Heavy rain in the evening called for a break for sometime.

Earlier, the party chief held a meeting with State office bearers and top leaders at Mehdipatnam, where he thanked them and the general public for the overwhelming response to his yatra.

Senior leader N. Indrasena Reddy, MLA Raja Singh and others claimed that the inaugural public meeting was an unprecedented success and has enthused the cadre.

Party sources also claimed that Home Minister Amit Shah made inquiries about the programme and congratulated Mr. Sanjay Kumar for the grand launch of the walkathon. He was said to have been briefed about the meeting by general secretary Arun Singh and State in-charge Tarun Chugh.

08/29/2021 India Comments Off on Metro to chug in Old City once in power: Bandi Sanjay Kumar
India