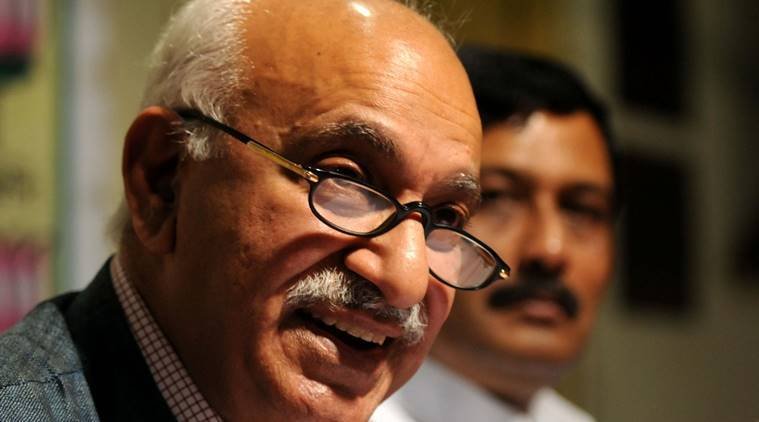 Akbar, who had resigned as minister on October 17 last year following the allegations levelled during the campaign, vehemently objected to the questions of Ramani's counsel about other women scribes who had also accused him of sexual misconduct. Former Union minister M J Akbar told a Delhi court on Monday that he did not ask scribe Priya Ramani, who has accused him of sexual misconduct in #MeToo campaign, to see him in his hotel room in 1994 in connection with her alleged interview to join a newspaper of which he was the editor.

Akbar, who had resigned as minister on October 17 last year following the allegations levelled during the campaign, vehemently objected to the questions of Ramani’s counsel about other women scribes who had also accused him of sexual misconduct.

The scribe-turned BJP politician was being cross-examined by senior advocate Rebecca John, counsel for Ramani, before Additional Chief Metropolitan Magistrate Samar Vishal, in connection with his private criminal defamation complaint against Ramani.

“I am not sure whether Priya Ramani was offered a job in the Asian Age newspaper in January 1994 in Delhi Office. As it is a 25 years old matter and to the best of my knowledge, she was working in Bombay office,” Akbar testified.

Ramani had tweeted about Akbar’s alleged objectionable behaviour in the hotel room.

Her counsel asked questions regarding other women scribes and their allegations against Akbar.

The queries were strongly protested by senior advocate Geeta Luthra, representing the former minister and she said that the questions were “irrelevant” as they were not related to the case at hand.

“These are all part of my (Ramani’s) defence as it shows his (Akbar’s) behaviour,” Ramani’s counsel replied leading to the heated exchange between the two women senior lawyers of the parties.

The magistrate allowed Ramani’s lawyer to keep asking questions to Akbar and also agreed to record the objections of Akbar with regard to such queries.

During the cross-examination, questions were put to him regarding other women journalists, including Ghazala Wahab, Kadambari M Wade, Majlie de Puy Kamp, Sonali Khullar Shroff and Harinder Baweja, who had accused Akbar of sexual misconduct.

Akbar said he had refuted the allegations levelled by Wahab in an article.

In response to another query, Akbar said he could not recall whether Wade worked with him as the matter was 20-year old.

Regarding allegations made by Kamp, he said “there was absolutely no question of harassment of the lady Kamp. I recall there might have been a mention of some misunderstanding which was accepted”.

Akbar said he did not recall whether Shroff worked with him and that he had not read any tweet written by her in regard of sexual harassment.

The cross-examination of Akbar by Ramani’s counsel remained inconclusive and would resume on on July 6.

Akbar, who resigned as Union minister on October 17 last year, filed a private criminal defamation complaint against Ramani after his name cropped up on social media as the #MeToo campaign raged on in India.

Ramani accused Akbar of sexual misconduct around 20 years ago when he was a journalist. He has denied the accusations.

Akbar had earlier told the court that the allegations made in the article in Vogue and the subsequent tweets were defamatory on the face of it as the complainant had deposed them to be false and imaginary.

He had told the court in his statement that an “immediate damage” has been caused to him due to the scurrilous, concocted and false allegations of sexual misconduct.

Multiple women have come out with accounts of alleged sexual harassment by him while he was working as a journalist.

Akbar has termed the allegations “false, fabricated and deeply distressing” and said he was taking appropriate legal action against them.