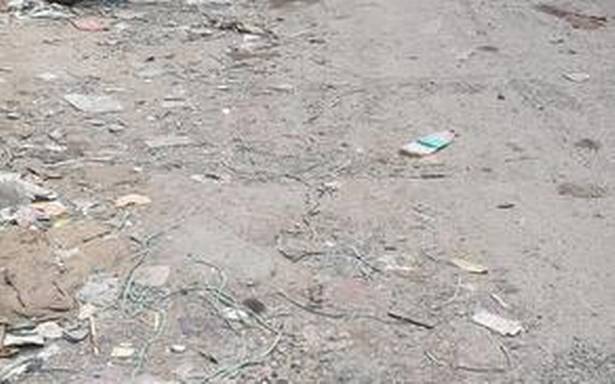 It is just 300 metres long, but its importaance is out of proportion to its length

Located in Choolai, this street, which is 300 metres long and 30 feet wide, is potholes-ridden. The importance of the street is out of proportion to its length. It is lined with commercial establishments, and connects two busy roads, Sydenhams Road and T.K. Mudali Street.

“It is more than 10 years since it was last relaid. For the past five years, we have made many representations to the Corporation seeking that the street be relaid. But the Corporation has said that Apparao Garden Street is a private stretch and therefore relaying is not its responsibility. But our contention is that the same road was relaid 10 years ago by the Corporation. There are street lights and underground sewage drains on Apparao Garden Road that have been provided by Corporation. Besides, there is a nameboard at the entrance of the street that has been installed by the Corporation. The nameboard says the road is part of Ward 78 and Zone 6,” says V. Krishna Mohan, president of the association.

Proprietors of the various commercial establishments say minor accidents are occurring frequently on the street.

“As the the road is sandy, there have been many incidents where two-wheeler motorists have skidded and got injured. Also, whenever vehicles pass through this stretch, it raises a swirl of dust. Garbage also gets accumulated on a portion of the stretch,” says K. Harihar, Chennai Timber & Plywood Merchants Association.