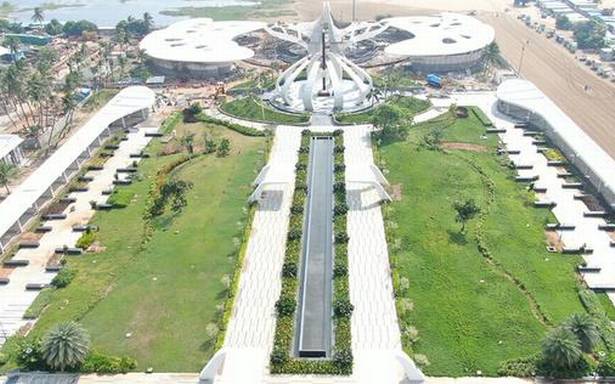 The AIADMK government’s ambitious project to construct a memorial for former Chief Minister Jayalalithaa on the Marina beachfront is set to be completed by early December.

The memorial, resembling a phoenix with two granite lion statues at the entrance, would be surrounded by lush gardens and small ponds. It would also house a state-of-the-art museum and a knowledge park.

According to the Public Works Department (PWD), which is executing the ₹57.96 crore project on the nine-acre site, the finishing touches are being put to the structure coming up behind the memorial of M.G. Ramachandran.

PWD officials said the aesthetically designed main edifice is a cantilever shell structure, with two arches acting as the spine, and would primarily be in white colour. The 75-foot-wide and 50-foot high columnless winged structure was designed by a team of the Structural Engineering Department of IIT-Madras, headed by S. Arul Jayachandran. “We used formwork designed by a U.K.-based company and manufactured in Dubai for the unconventional superstructure. Formwork is temporary moulds that are crucial in holding the cement concrete structure intact. About 200 props were used for each wing,” a senior official said.

The work had to be continued through the COVID-19 pandemic to ensure its stability and about 200 labourers were engaged to execute the challenging and unique design. Nearly 400 tonnes of steel were used for the foundation alone. “We took nearly a year for the design and the work on the main structure alone,” the official said.

As an extension of the bird’s wings on the northern and southern sides, a museum and a knowledge park have been built on space of 8,500 sq ft each.

While the museum would have a chronicle of the events in Jayalalithaa’s life through audio-visual presentations, photographs and virtual reality, the knowledge park would have digital shows on her achievements and speeches. A life-size statue of the former AIADMK leader would also be installed.

An additional sum of ₹12 crore has been allotted to give finishing touches to the project. “We visited Rajahmundry in Andhra Pradesh and chose saplings that will arrive next week. The memorial will also have disabled friendly ramps, pavilions, ornamental lights and service blocks,” the official said. The new constructions have come up on a space of about 50,000 sq ft.

The MGR Memorial has also been refurbished and a compound wall has been built as part of the project. Chief Minister Edappadi K. Palaniswami laid the foundation for the Jayalalithaa Memorial in 2018. It is expected to be inaugurated around Jayalalithaa’s birth anniversary in February next.