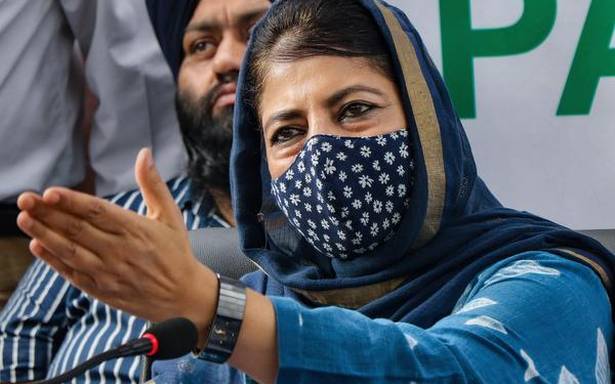 In a tweet, the former J&K Chief Minister criticised the Bharatiya Janata Party-led (BJP) government at the Centre. “GOI [Government of India] first gets a docile media to berate Congress and lament lack of a viable opposition but systematically ensures they don’t discharge their duties by illegal arrests. We are a democracy on paper but clearly the grim descent into a banana republic has begun,” Ms. Mufti said.

Earlier, she said that what had “started in J&K” had been “sadly met with an air of indifference” but had now “engulfed the entire country”. “When will we speak up?” she asked.

“She was going to meet the families of slain farmers, but was detained without any reason,” Mr. Mir said.

Later, Congress leaders and workers were stopped by the police at Maulana Azad Road in Srinagar. They were lodged in a local police station.

“Congress won’t be cowed down by the barbarism and illegal detentions. Rather, it will further strengthen our resolve to fight against the BJP, which is responsible for the crisis across the country,” he said.