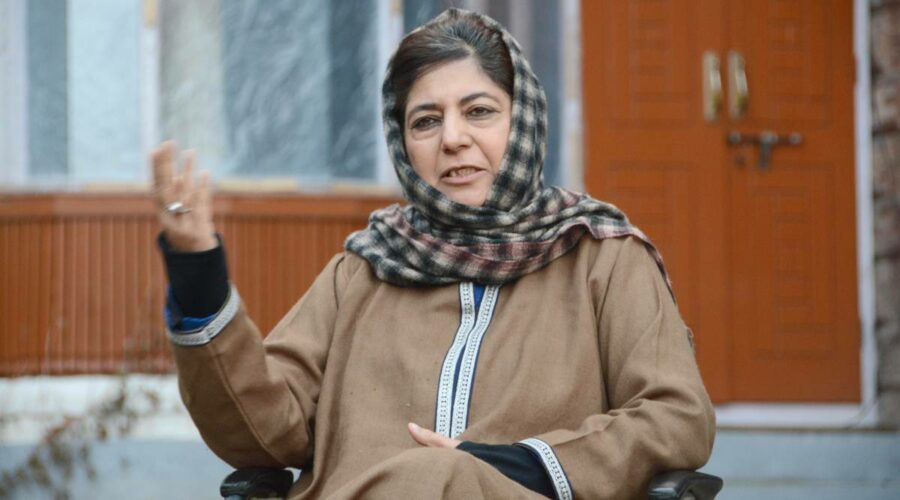 The former Jammu and Kashmir chief minister said she did not wish to "politicise the human tragedy that has befallen us all". PDP president Mehbooba Mufti on Friday appealed to Prime Minister Narendra Modi to release all political detainees languishing in jails in and outside Jammu and Kashmir immediately in the wake of the worsening COVID-19 situation.

“Throughout the world, most countries have released prisoners on parole in view of the alarming COVID crisis. A democratic and civilised country like India shouldn’t drag its feet and must release these detainees immediately so that they can return home at a time when life feels so threatened,” Mehbooba said in a letter to the prime minister.

The former Jammu and Kashmir chief minister said she did not wish to “politicise the human tragedy that has befallen us all”.

“It’s an unprecedented humanitarian crisis that doesn’t discriminate on the basis of caste, colour, religion or social status and has affected everyone. Perhaps the only silver lining in this tragic time is how Indians cutting across religious and regional lines are coming together to lend each other a helping hand,” she said.

Mehbooba said worrying reports about prisoners dying due to COVID-19 and subsequent lack of medical attention have been trickling in. At a time when the system is struggling to cope with this horrendous situation, lives of prisoners may be the least priority, she said.

“As far as Kashmir is concerned, it is no secret that hundreds, or may be thousands of detainees and political prisoners arrested since August 2019 continue to languish in jails both in and outside J-K.”

“Most of them are detained under preventive laws and don’t face any prosecution. Many continue to be held even after courts granted them bail. Most recent reminder of the lurking threat to their lives is Mohammad Ashraf Sehrai’s death who lost his life because he contracted COVID in jail and was deprived of medical care,” she added.

The PDP president hoped that the prime minister will give due consideration to the matter and order the release of detainees.