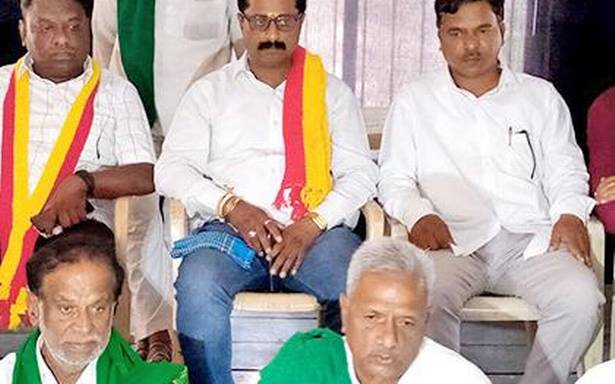 Over 50,000 farmers from across the district to take part

A mega convention of farmers, Raita Maha Panchayat, will be held in Belagavi on March 31 and over 50,000 farmers from across the district are expected to participate.

Addressing a joint press conference in Belagavi on Saturday, farmers’ leaders Babagouda Patil, K.T. Gangadhar, Chukki Nanjundaswamy, and others said that through the mega convention, the farmers would register their protest against the three farm laws that were detrimental to the farm sector.

Mr. Gangadhar alleged that Prime Minister Narendra Modi had put ‘Bharat Mata on sale’ and was raising slogans of ‘Bharat Mata Ki Jai’. He said nobody could snatch away the constitutional right of agitation of the farmers and Mr. Modi and Chief Minister B.S. Yediyurappa should behave responsibly. He demanded that the farm laws be repealed immediately.

He said that any effort to disturb the maha panchayat would evoke strong reaction from farmers. “The farmers’ agitation has now become a people’s movement with organisations from every sector expressing solidarity as the privatisation policy of the Centre is detrimental to all the sectors,” he said.

Terming the farmers’ agitation as the second freedom movement, Mr. Nanjundaswamy of Raita Sangha said the implementation of the farm laws would adversely affect the middle class apart from farmers.

Taking exception to the policies of State and Central governments, former Union Minister Babagouda Patil lambasted the government’s move to arrest farm leader Yudhvir singh. Mr. Patil alleged that the government was trying to snub the farmers’ movement and it would not be tolerated. “The Centre should first take up initiatives to address the hunger issue rather than building airports. First give work to empty hands. The farmers’ agitation should become youth agitation,” he said.