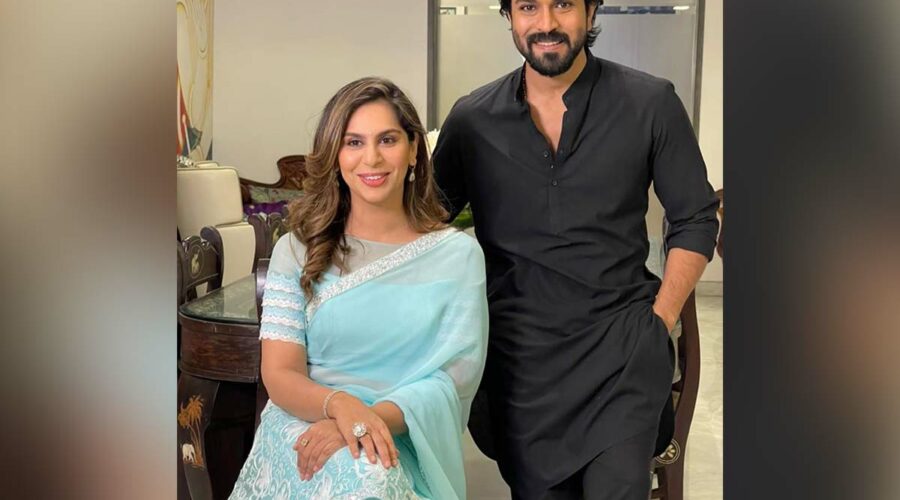 Ram Charan who is enjoying the success of his recent offering RRR, is busy in his production venture Acharya in which he is also playing the lead role.  Ram Charan is a well known actor and influential personality in Tollywood. Earning recognition as a popular star, Ram Charan is a real life gentleman and a devoted husband. His wife Upasana Kamineni Konidela is an entrepreneur and vice-chairperson of Apollo life, a healthcare and wellness magazine.  The couple together have created an ecstatic aura of positivity and their social media handles are enough proof.

Upasana Kamineni Konidela who is an active user of the social media sites, took to her twitter and shared a pic of her with Ram Charan and captioned it: That’s us…All set for #Acharya…This movie is for my Athama…April 29 in theatres.”

Coming on the pic, Charan is winning hearts with his smile  and mega daughter in law Upasana Kamineni Konidela looking cute  a light blue saree with white lacework.

On the otherside,  Upasana Konidela reacted to her husband’s reply to Suma’s question during  the pre release event of Acharya that took place yesterday. Suma asked Ram Charan whether he is afraid of Chiranjeevi or Upsana at his house. In reply, Ram Charan said that he learned from his father how he is careful with his mother and further added that he will follow his mother. Reacting to his reply, today, Upsana took to her Instagram and wrote as “Hmmmm Mr C, gurthu pettukunta” .

04/24/2022 India Comments Off on Mega DIL Upasana promotes Acharya: This movie is for my Athama
India