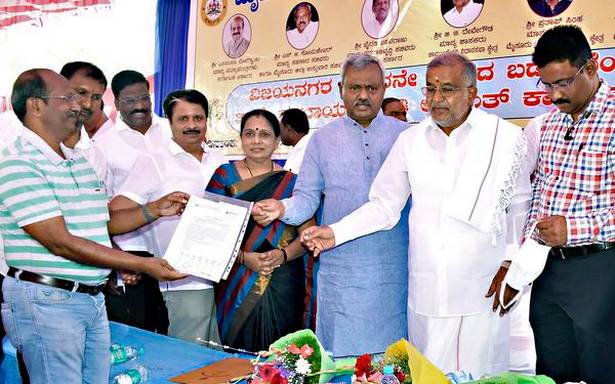 All revenue-related transactions pertaining to properties in Vijayanagar 3rd stage were transferred from the Mysuru Development Authority (MUDA) to Mysuru City Corporation (MCC) with effect from Tuesday.

The MCC will also be responsible for maintenance of civic infrastructure and amenities in the area. District in charge Minister S.T. Somashekar inaugurated the programme and handed over khatha to some of the beneficiaries besides distributing some building licenses and trade licenses.

G.T. Devegowda, MLA, said nearly ₹25 crore worth of civic works will be taken up from February 1, including road repairs, UGD and storm water repairs. Mr. Devegowda said nearly ₹377 crore had been sanctioned for undertaking various repairs and maintenance works in the MUDA layouts as a one-time measure of which ₹25 crore had been sanctioned for works in Vijayanagar 3rd stage. The area was hampered by lack of civic amenities and regular drinking water but things were set to change, said Mr.Devegowda. He said the Government was also implementing the Haleunduwadi drinking water project and once completed, it would ensure adequate water supply to the projected population of Mysuru for the next 50 years.

MUDA chairman H.V. Rajeev said the transfer of Vijayanagar layout from MUDA to MCC will change for the better the fortunes of local residents.

He said while some properties had khatha issued by the MCC, there were others in the same area where the MUDA had approved the building plan and issued building license. Hence, there was confusion among the authorities as to who would take up the maintenance works. But now it has been resolved and the area will see positive development in the days ahead, he added.

The works under one-time measure to be taken up by the authorities including sprucing up civic infrastructure including road repairs, UGD repairs, providing street lights. This is part of the ₹377 crore sanctioned by the State Government to spruce up infrastructure in MUDA layouts before they could be handed over to MCC for maintenance.

Some of the MUDA layouts were languishing in neglect and the issue was also compounded by a State Government notification of 2019 as per which the MUDA was divested of the task of maintaining the infrastructure on the grounds that it was the responsibility of the local civic agency.

However, the MCC refused to accept the transfer of layouts until the MUDA shored up the amenities. The issue remained unresolved and the civic amenities originally created by the MUDA at the time of the formation of the layouts more than 20 years ago, had completely crumbled in the absence of maintenance.

Hence, the local elected representatives met Mr. Somashekar and urged him to prevail upon the Government to sanction funds to take up the repair works as a one-time measure before it could be transferred to the MCC. The Mayor Sunanda Palanethra, MCC Commissioner Lakshmikanth Reddy and others were present.