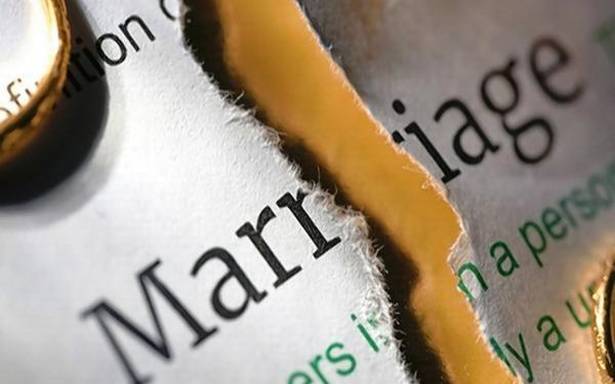 Judge laments absence of a law like Domestic Violence Act for men to lodge complaints against wives.

The Madras High Court has observed that the present generation must understand that marriage is not a contract to be broken at the drop of a hat, but a sacramental event in a person’s life. The court also said: “Of course, the word ‘sacrament’ has no meaning after the coming into effect of the Protection of Women from Domestic Violence Act of 2005 that approves live-in relationships.”

Justice S. Vaidyanathan further lamented that “unfortunately,” there was no law such as the Domestic Violence Act for the men to proceed against their wives. The observations were made while quashing the suspension of a government veterinarian on the basis of a complaint lodged by his wife, accusing him of domestic violence, just four days before the couple was granted divorce by a family court.

The judge pointed out that the writ petitioner’s wife had initiated proceedings under the Domestic Violence Act against the veterinarian before an Additional Mahila Court in Salem in 2014. Thereafter, in 2015, the petitioner preferred a divorce application before the Family Court in Salem and sought divorce from his wife after accusing her of subjecting him to cruelty and also deserting him voluntarily.

The Family Court found force in the grounds raised by the writ petitioner and granted divorce on February 19, 2020. However, four days prior to the verdict, the petitioner’s wife sent a complaint regarding the domestic violence proceedings to his employer, and it led to the Director of Animal Husbandry and Veterinary Services suspending the petitioner from service on February 18, 2020.

Disapproving of the conduct of the complainant, the judge said that the timing of the complaint “clearly shows that she had anticipated the divorce order and created unnecessary trouble to the petitioner.” In a piece of advice to married couple, the judge said: “Husband and wife must realise that ego and intolerance are like footwear and should be left out of their house when they enter the home. Else, the child/children will have to face a miserable life.”

Stating that the suspension of the writ petitioner was unwarranted, the judge ordered that he should be reinstated in service within 15 days.

06/01/2021 India Comments Off on Marriage is sacramental, a word that has lost its meaning due to recognition of live-in relationships, says Madras HC
India